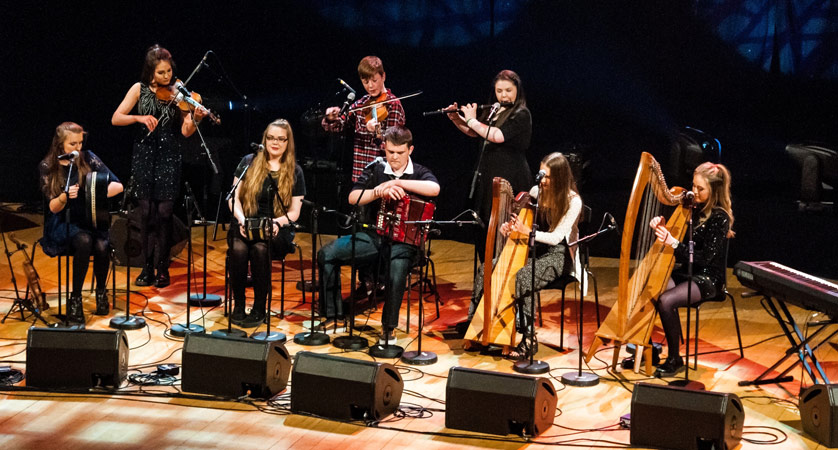 MUSICAL STRINGS HAVE BEEN TIGHTENED, uillean pipes tuned, accordions polished, shirts and dresses bought… Yes, the big day is almost upon us.

Sunday April 17 will see the gathering of traditional music’s young elite, their fans and all connoisseurs of good music assembled in The National Concert Hall, Dublin for the finale of Siansa Gael Linn 2016, one of the highlights in Ireland’s music calendar.  The first competitive note will fill the air at 7.30pm.

Eight bands are taking part in the final and one will be going home triumphant with the Siansa Gael Linn award won, a gleaming Gael Linn trophy in hand and a cheque for €2,500 in pocket. Not a bad day’s music-making!

The gathering of top musical talent is not an overnight affair. Hours of practice and sacrifice have been given over by young people hoping to make this day. These are the best of over 50 groups who applied for the competition.

But talent wins out.  The eight chosen groups will bring something special to the audience’s ears under the stately rafters of the National Concert Hall next Sunday, April 17.  Between the contestant’s consumate music-making and the cacaphony and rapture of the audience during the intervals Siansa is unique in its heady atmosphere of competition and entertainment.  The only section suffering will be the judges, endeavouring to extract a winner of Siansa 2016. The judges this year are Niamh Ní Charra, Dónal O’Connor and Declan Masterson

Each group will perform their own 10-12 minute musical arrangement and will be judged on performance on the night, choice of music, arrangement, singing and ensemble playing.

Although there is a generous prizefund of €4,500 Gael Linn are heartened to know that that is not the main spur for the young musicians. “We are told repeatedly that the competition alone is not the main reason for them getting involved in Siansa,” says organiser Niamh de Búrca. “It is the prospect of performing in front of an audience of 1,000 in such a prestigious venue that is their prize before anything else.”

Siansa Gael Linn is one of the highlights in Gael Linn’s annual calendar of events. Now over 60 years in existence, the organisation is credited with rescuing Irish traditional music from the doldrums, galvanising it with Sean Ó Riada and Ceoltóirí Laighean and boosting it through the decades with ground-breaking bands like Clannad. The Irish language has also benefited from its entrepreneurship in many guises: from organising country-wide and ever-popular debating competitions, drama production and Gaeltacht courses and the latest and innovative new scheme, Gaelbhratach. According to Gael Linn chief executive Antoine Ó Coileáin, the organisation has and never will stray from its main objective “to provide opportunity through the medium of the Irish language. You will see that today at Siansa Gael Linn and we hope to continue to provide that opportunity in the decades ahead.”