Soaking up the buzz surrounding Notify and their new ‘InConcept’ album

Notify made a welcome return with a new album called InConcept in April this year. We added an exclusive track called Vividity to our Soundcloud file and include it below.

Once again this recording shows Notify to be one of the most imaginative bands around. They describe their music as "forward looking, stylistically adventuresome and musically well executed, it challenges received notions of Irish traditional music purity." Pádraig Rynne is the driving force behind the band that now includes Cillian King on Guitars & Vocals, Eoin Walsh on Electric Bass, Davie Ryan on Drums and Cormac McCarthy on Piano and Keyboards. Their varied backgrounds in Jazz, Traditional Irish, Electronic, Pop and Funk music contributes in a significant way to the overall sound which is a mix of original melody compositions and songs.

We have previously covered their ‘Notify & Pauline Scanlon release from last year as well as their debut release in 2013 which reached No.20 in the iTunes World Music Charts upon its release.

Talking to Pádraig he said that looking back at InConcept, it is probably the happiest he have ever been with an album that he played on. “Over the past few years I feel as though I had focused too much on heavy production and had missed the importance of live music and all that comes with it.”

With this new album, the band has recorded all the tracks live with the intention of being able to reproduce the sounds at live gigs. Some tracks still use sampling and programming but these are used to compliment the arrangements. “We made every attempt to make them feel as though they were part of the music but not central,” he said.

“The original album, NOTIFY (released in 2013) was a solo project where I wrote all the music and asked my good friends Tyler Duncan, Joe Dart and Mike Shimmin to be guest musicians on the recording. Tyler also produced the album and worked with me on arrangements. The approach was to bring some pop and funk elements into the arena with the concertina. While this was just meant to be a once of album, the public seemed to enjoy it and it resulted in contact being made for booking NOTIFY. I very quickly realized we weren’t a band and had to make some decisions, if I wanted NOTIFY to become a band.”

“In 2015 I asked both Cillian King and Eoin Walsh to work with me in creating NOTIFY – as an actual band. Eoin had been working a lot in a jazz trio with Davie Ryan on drums and Cormac McCarthy on Piano. He suggested that we approached the two guys to become part of NOTIFY and they thankfully were into it.”

They spent the next few months gigging, writing, arranging new material and re-arranging old material in a way that had a common theme and sound. In essence they were creating what is now the NOTIFY sound.

“All five band members had equal creative input into the band material, arrangements and sounds” he said. “We spent more time throwing out material and arrangements than we did in agreeing to keep and work on material. What we ended up with was 8 brand new tracks which are on the InConcept album. We knew we were very happy with them because they were the only tracks out of maybe 30 to make the cut in our over critical minds. In writing the music we 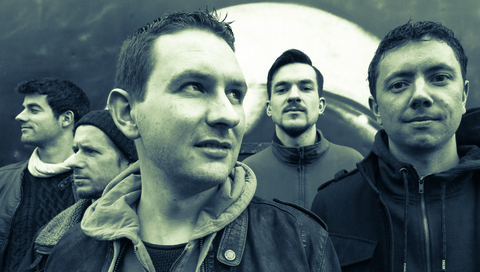 took many different approaches and each piece was different. Some were done with sheet music, others were done by the whole band just sitting together and looping grooves that would expand, while others were melodies that were already in development but were finished with the whole band together. Cormac, Eoin, Davie and Cillian bring a massive imagination to the band. Their knowledge of rhythm, harmonies, chords and melody playing is as good as I have worked with. Most importantly, there are absolutely no egos in the band.”

The new and now very concrete line up of NOTIFY involves five musicians who come from Traditional Irish, Jazz, Folk, Funk and Electronic musical backgrounds. They have found a happy medium creating what they create.

“We don’t know what this sound is exactly to describe in words but we do know that it’s very enjoyable to perform. It brings lots of emotion to the ear but also energy when needed. We are not looking to do anything in particular but instead are just happy to be doing our own musical thing and are happy to see where things will go.”

In Concept got a surprise release from Ropeadope records on 29th March and went straight in at No 1 in the iTunes Jazz charts. It is was also lying in 11th in the mainstream charts ahead of Coldplay.

“There is a buzz surrounding the band and music at the moment which is enjoyable and we will soak it up for the time it stays” he says.