Welcome to Tradconnect’s Worldwide Album Launch Series. For these launches we are working with over 110 radio broadcasters globally, making new traditional releases available for immediate free download through our Download Centre. For artists this makes an online launch a truly global event, with radio stations around the world gaining instant access to the album.

"Without a Paddle" is the latest album release by Clare trad trio, Socks in the Frying Pan. Over the last 5 years they have established themselves as one of Ireland’s best traditional bands and this, their third release over a relatively short period, will further enhance that reputation.

Their self-titled debut was released in 2012 to critical acclaim. Their second album, "Return of the Giant Sock Monsters From Outer Space" was released in 2015 and was very much part two of their story, with high tempo traditional tracks accompanied by a number of great vocal numbers. The customary stops and changes of tempo prevailed and provided the energy that has become their trademark.

Following a very successful US tour in 2016 they returned to Ireland to launch Without a Paddle. Our sample track is called “When I first Came to Caledonia." The song is from Cape Breton, Nova Scotia and refers to the Caledonia coal mines in Glace Bay with the reference to #3 being one of the pits. Recently the band were lucky enough to get to travel there and pass Scatarie and Boularderie Island, both of which are mentioned in the song.

The band comprises brothers Shane and Fiachra Hayes on accordion and fiddle/banjo and Aodán Coyne on guitar and vocals. They blend Irish traditional melodies with their own personal flair and this has gained them critical acclaim and accolades including 'New Band of the Year' by the Irish Music Association.  Praised for their modern traditional style and energetic approach to music, they have worked to capture this on Without a Paddle. 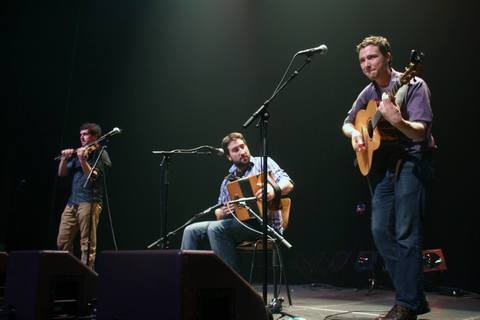 The album features 11 tracks - 5 songs and 6 tunes encompassing both newly written material and tunes selected from the ether of the Irish music collective and reworked with the trademark socks twist!

They said: “The aim of the album was to find a balance between the raw and powerful first album and it’s equally progressive follow up. The Socks have accomplished this in a most tasteful manner offering a perfect balance that is most reflective of what a live show would offer.” It is the perfect piece to complete the trilogy of albums and testament to why they are one of the hottest names on today's music scene.

If you want to hear more, the album is now available to purchase on www.socksinthefryingpan.com or download from https://itunes.apple.com

Downloaded for airplay on "Down the Back Lane", WXNA 101.5 FM, Nashville every Sunday 4-6 PM US Central TIme, and streaming/archived at www.wxnafm.org