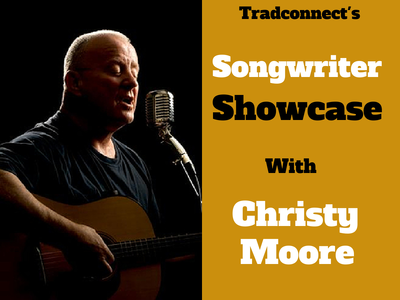 My name is Ronnie Moore. Originally from Donegal I have lived in Kerry for a long time now where I have been working as a watercolour artist. (www.ronniemooreartist.com). I also write music and gig occasionally. The subject matter of my songs are wide and varied. This one, Carolina, is a laid back emigration song. Hope you like it. I am also singing and playing it it on the recording.

For most of my adult life I have worked as an illustrator/designer. This drew me into full time illustration work as a freelancer. This took me, at times, down to Dublin and across to Glasgow. Through self publishing an illustrated book, re-telling the Giant’s Causeway story, (1996), I was pulled, like a water leaf, towards storytelling in schools. (1997-2014) Invitations came and over time I began to write songs again and sing in the school sessions with a Kenyan hand drum. (A present from my wife Ann in 1998).

Then in 2010 I got a bit of airplay on the Gerry Anderson Show with a song from my school workshops, called "The Wee Wee Man". This pushed me into playing live on the show, four times in a year, with some of my friends called “The Moon Shed”. (I hope Gerry gets well soon as he has been an ill man). Some of the songs I write are funny, some serious. Many tell stories, or make a point. Most grow out of my understanding of our local culture, in its many forms and layers. I like to connect with an audience, individuals and other musicians. For me it is “the warm place”.

“Patrick is my name” looks at immigration through the name Patrick. All leaves from one tree. All falling and landing on different soil. Firstly, as the man himself as a slave to Ireland. Enforced immigration. Then Patrick, the man working on the roads in England. Then celebrating the culture with drink and song. Then as a black slave, being brought to America, taking on the name Patrick through the experience. But all the time, looking up, either at the stars or just with hope for the next day. I haven’t written this song to fit the brief. All my songs come to me in a very random fashion. They land, like a blue butterfly on my shoulder. Make me aware. Most times I stop and listen, as on other occasions, the moment has slipped by like sun and showers. So I try and respect these opportunities when the come.

Peter O’Malley set sail from his native town of Limerick, back in the bad old days, when you could nearly sell your job on the open market. Armed with guitar the green fields of France awaited. The busking became full time work for many years and brought him the length and breadth of Europe. Then living in Munich for two years he recorded his first E.P. This led to parts in a German T.V. documentary and many appearances on the very healthy folk scene at the time. The homeland was calling him back and he knew that he would have to return to Limerick.

Peter then set up the O’Malley’s who at that time were playing a mix of country, folk, blues, Americana and Irish. It was a three piece band and they recorded a four song (E.P.) and did one or two shows on R.T.E. Then the band got bigger and did tours of Germany (in a red V.W. Van, God Bless it). The O’Malley’s went on to play all the main venues around Ireland, released two records and Videos, and performed on every TV show, from, The Late Late, Pat Kenny, Sunday night at the Olympia, Brendan Grace Show, Shay Healy’s Nighthawks weekly show. Then they toured England, Russia and the States. Peter went solo doing the club circuit. www.peteromalley.net

My name's Rich McMahon, an Irish songwriter & performer based in Birmingham UK. I've been performing full-time for a few years now, playing pubs, festivals, village halls, coffee houses, anything I can get. The songs I write tend towards the Irish Ballad tradition while addressing contemporary themes. The song I've submitted for the Songwriter Showcase is called 'Ten Thousand Miles from Dublin', and it concerns the latest wave of emigration, post-Celtic Tiger, from Ireland to Australia. It's an issue that has affected my own family, and is told from the point of view of a person who has been forced to emigrate and blames his exile on those in charge back home. If you'd like to find out more about me please feel free to check out my website, www.richmcmahon.com

My name is Mick Ryan and I am a Singer/Songwriter from Limerick. The song "Rags To Riches To Rags" is an emigration song that covers three periods in Irish history when emigration was at a high level i.e. the fifties/early sixties the nineteen-eighties and the present day and probably the main point it is trying to make is that present day emigrants (in the main) are more empowered in the sense that they are more educated and have more choices regarding work whereas emigrants in the past had far fewer choices.