Sonny Condell & me - seizing the day with an Irish musical hero 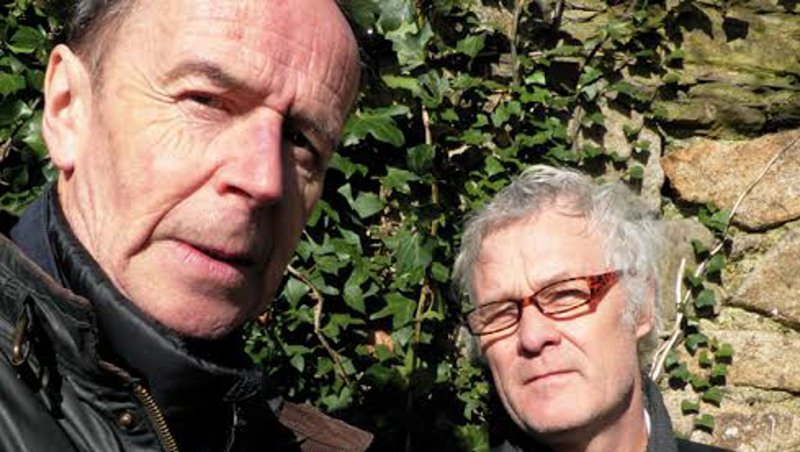 Via RTE Culture. The singer songwriter Sonny Condell and the poet and lyricist Paddy Kehoe have just released an album together, entitled Seize the Day. In this tribute, Paddy celebrates his collaboration with a musical hero.

The two swimmers on the cover are seizing the day, bathing in the waters of Corfu, drawing the best from the summer’s day. That's where it should start. Some of the songs on our album may seem suffused with regret, or may seem to hanker after absent things that have slipped, but ultimately the note is positive. Seize the Day, as both album title and song, is intended to suggest that sense of hope and uplift we get in fine weather.

Sonny composed all the music and I wrote the lyrics. However, Sonny too has been an exemplary lyricist in songs like Downrunning, Forever Frozen, Two White Horses, Sign of Madness, Kings, Eyelids into Snow, Down in the City, Feast of Eyes, Evil and many other songs. There is no reason to believe that future recordings will not see more of that lyrical gift in evidence."

Born in 1950, the musician grew up on a farm in Newtownmountkennedy, County Wicklow and attended boarding school in Blackrock, County Dublin. As soon as he heard The Beatles, he knew pop was the way to go and school-work became secondary. He has lived in cities, in London and in County Dublin now for many decades, but his excursions in pop and folk and prog folk have not always felt wholly urban. His great song Driving is set in a city, a taxi ride into town, car lights glimmering in the dusk, "some of them on dim." City it may be in Driving, yet the song remains curiously pastoral, because of an inherent awareness of weather and the look of things.

That farming background means Sonny knows about the look of the weather. We have rural sides to us both - my parents were both of farming stock - and I also spent five years in a boarding school, which can be a kind of never never land, a limbo between urban and rural. Sonny's school, he tells me, was relatively lax and allowed him the freedom to come and go, within reason. Mine certainly did not. So are we looking at what we do from different sides of a high school wall then? We do at least have weather eyes in common and it seems perfectly natural for Sonny to sing the following lines in the song Interregnum:

In the bright mauve evening/in the lavender light/ in the orange glow over the rooftops.

I wrote those lines in the short poem, Via Augusta, almost ten years ago, a poem which was subsequently published in my first book, yet Sonny seems to sing them as though they were his. Back in the early seventies, the man made his mark on the UK scene with Leo O'Kelly in the folk-rock duo, Tír na Nóg who opened for The Who, Procul Harum and Supertramp. They toured America, they toured Europe with Jethro Tull, beginning in Bergen and ending in Rome. Tír na Nóg still get together for occasional week-long English tours – there is another in early June -  but after their original disbandment in the mid-seventies, Sonny returned to live in Ireland permanently.

I recall watching Tír na Nóg on The Julie Felix Show in the late 1960s on Teilifís Éireann. I remember in particular Two White Horses, Time is Like a Promise, Picadilly and So Freely. There was great excitement when Tír na nÓg reformed to tour Ireland with mesmeric power and extraordinary vigour in the mid-eighties on the back of a hit single, Love is a Violin.

Around 1977, Sonny had formed the first incarnation of the band Scullion, who gave us the albums Balance and Control, White Side of Night and Spin. Soft-spoken and modest about his talents, Sonny yet seemed like a colossus on the Irish song-writing scene in the 1980s.  Working with him, you sense patience allied to a steady confidence while his motivational ability is a quietly assertive force. That patient appeal could, by a sort of charismatic diplomacy, marshal the gifts of a singer like Philip King, a piper like Jimmy O’Brien Moran, or the talents of guitarists such as Greg Boland and Robbie Overson, all of whom were members of Scullion at some point or other.

I always believed that, aside from his amazing musical gifts, Sonny was a fine lyricist. So up until relatively recently, I thought he would have no need of my poems. I had given him my two volumes of poems, Its Words You Want (Salmon Poetry, 2011) and The Cask of Moonlight (Dedalus, 2014) as they appeared. I subsequently sent him further poems and drafts of lyrics. Then one day about 18 months ago, the email with the MP3 arrived, the first demo of the song Father, based on a poem of mine which is a mere six lines of verse. Slight though my lyric might have been, the demo set the ball rolling towards the album of 13 songs which is Seize the Day.

The lyrics on the album are either newly-generated or based on poems gathered in my two collections of poetry. Through reading these poems, Sonny found an imaginative route towards creative space, a trusty coracle that took him out from Dun Laoghaire harbour towards the sultry Mediterranean, and to the far Ionian island of Corfu.

On the album, the musician works a vein of acoustic country simplicity on Travelling Show, makes dark magic from the baleful ballad Don Quixote. He sets up a wave of evocative choral layering on Gold City and hones harder edges than JJ Cale on the bluesy Empty Well. In complete contrast, Miles to Hear is a skillful marriage of Bossa Nova and Flamenco.

Jaguar Print rustles up light-fingered funk, while Interregnum is a graceful and majestic meditation. Ghosts in White Face is suffused with longing and the sense of time passing, elements present also in the opening track, Running into Blue. Similar they may be in sentiment, but the moods of both tunes are entirely distinct. Sonny told me he was trying for a sean-nós air in the meandering melody of Running into Blue. I hear Indian traces too.

So, everything is different in the music on Seize the Day.