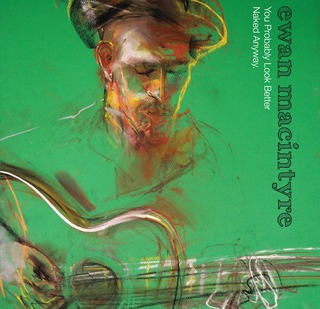 Scottish composer, musician and puppeteer, Ewan MacIntyre will release his debut solo EP ‘You Probably Look Better Naked Anyway’ on May 11th  in Ireland alongside Irish tour dates starting on 12th May in Cobblestone Dublin, then visiting Áras Éanna, Inis Oírr on Saturday 14th and ending on Sunday 15th May in Kennys in Lahinch.  Listen to the ep: ewan-macintyre.org

The 5 track EP, which was recorded in Montreal, reached #3 in the National Folk/ Roots charts of Canada. Named after some infamous graffiti outside Montreal’s ‘Eva B's’ vintage clothing store, ‘You probably look better naked anyway’ is a collection of songs written while Ewan was on a year of self discovery and adventure, hitch hiking around Canada's East coast and during an idyllic spell staying in a cabin in the woods. A talented musician and songwriter described as a “standout Scottish voice”, Ewan attracted a diverse array of 10 fine musicians to feature on the album from France, Quebec, Ireland/ South Africa, Scotland, England and Ontario.

Ewan McIntyre has a long musical pedigree – as former lead singer with the award-winning Edinburgh collective Southern Tenant Folk Union he performed the length and breadth of the UK and Ireland at top venues & major festivals including Celtic Connections & Electric Picnic and in 2011 the band won Americana Artist of the Year.  He recorded 2 critically acclaimed albums with them, receiving stellar reviews from Mojo, Q, The Guardian, Irish Times, Uncut, Irish Mail on Sunday, Hot Press as well as TV performances on RTE’s ‘Late Late Show’ & ‘The Works’.

Combining traditional Scottish & Irish folk alongside jazz, swing and soul, Ewan is completely at home onstage having performed in theatre and music productions since the age of 5.  During the live shows on the forthcoming Irish tour, Ewan will weave his own blend of heartfelt ballads, rich melodies and extended jams with his band alongside some lively banter with the audience – who knows who might join him onstage for an impromptu session!