Straight-up trad at its best 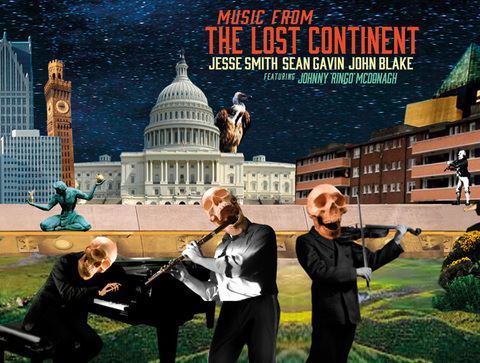 “Music From the Lost Continent” is the new album from Jesse Smith (fiddle), Sean Gavin (flute), John Blake (piano), and Johnny “Ringo” McDonagh (bodhrán), and it is a bona fide cracker. Featuring a group of young players who are considered musicians’ musicians, the album hits on every cylinder. The individual performances are spectacular, the players articulate with a natural ease that contribute to a greater whole, and in the end it’s the listener who benefits. It is a special album of straight-up traditional music.

Blake grew up in London, learned from Brendan Mulkere and now lives in Ireland. Not only is he considered one of Irish music’s finest accompanists on piano and guitar, but he’s a brilliant flute player as anyone who has heard his 2014 album “The Narrow Edge: Irish Music on the Flute” can attest.

Smith grew up in a musical household in Baltimore (his mother is pianist Donna Long and his father John is both a singer and guitar player), and he learned fiddle from the great Brendan Mulvihill. He moved to Ireland years ago and has settled into the music over there.

Smith and Blake have a longstanding musical relationship. Both were a part of The Tap Room Trio with Harry Bradley (2014 Gradam Cheoil “Musician of the Year”), “The Ewe With the Crooked Horn” with Colm Gannon and “At My Grandmother’s Knee” with fiddler Mick O’Grady. (Incidentally, Smith, Blake, and Gannon all played in support of Bradley at the Gradam Cheoil concert).

Gavin’s place is this equation is perhaps a bit less obvious. A member of the groups Bua and NicGaviskey, and a frequent touring member of Téada, Gavin grew up in Detroit, lives in Chicago, and is the recent winner of the Seán O’Riada Gold Medal competition. He has in fact been in the Smith/Blake circle for a good long while – he’s known and has played music with them for years, shares their approach to the music, and has worked with many of the same people, including Bradley (Colm Gannon) on Bradley’s great 2013 album “First of May” – but this recording is his first with them as far as I know.

Finally, there’s McDonagh, who is best known for his work with De Danann. Given his seniority in the music, it would be easy to see him as a kind of interloper or his place here as something of a hired gun, but the opposite is true. McDonagh is completely inside things here, which is a testament to his playing, but also to the strength of Smith, Blake, and Gavin’s music.

It’s a powerful lineup that includes visionary young players, and the music comes together accordingly. It starts with a top notch tune selection. The repertory reflects the interests and “terroir” of each of the musicians – tunes as played by Chicagoans Johnny McGreevy, Joe Shannon, and Kevin Henry; fiddle legends deeply rooted in America, like Michael Coleman, James Kelly, and Paddy Cronin; and others who define the music in different way, like Sean Ryan and Willie Clancy, which sets an important tone.

But the magic here is in how the tunes are played. The music is open and inviting, and incredibly rewarding aesthetically. From “Anderson’s / …” – the album’s first track – on through to the end, there’s nothing that doesn’t invite the listener in. The fiddle and flute blend together unbelievably well, and have great lift, especially when the piano and bodhrán are added in.

It’s hard to single out individual tracks because the quality throughout is so high. Smith’s feature on “Pigot Magree / …” is great, as is Gavin’s on “Dermot Grogans /….” I’m particularly drawn by the hornpipes “Murtough Molloy’s / …” and the reel sets “The Green Groves of Erin / …” and “St. Ruth’s Bush / …,” but a listener’s favorite tracks will largely depend on personal taste – there is a lot to really dig into and love here.

Brilliantly realized, “Music From the Lost Continent” is an amazingly rich and nuanced album from three deeply able players who have a strong rapport and who play together with amazing intuition. Their music is soulful, elegant and played with a ton of lift. This is an album that won’t disappoint and should belong in every traditional music fan’s collection – this one’s thoroughly recommended without hesitation. “Music From the Lost Continent” is available through CD Baby, Custy’s, and wherever fine traditional music is sold.