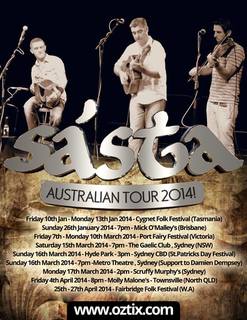 Not many people will be familiar with Australian band Sásta. They are leading the way down under as one of our best trad exports with a busy gigging schedule and a second album in production.  We received their debut album last year but didn't quite get round to a review.  As you can tell from the included audio they are a highly accomplished outfit with a driving rhythm.

The Australian music scene is something we should possibly give more time to and we may try and catch up with one of the band to see what is happening on the music scene down there.

They are back in the studio recording their second album and have stated a crowdfunding campaign on the Australian version of Kickstater, called Pozible, to raise funds.