We have always been a big supporter of any artist trying to raise funds to record or complete albums.  Kickstarter and other funding vehicles are a great opportunity to get behind artists at an earlier stage by simply buying the album in advance.  Here is the latest campaign by a band called Four Winds.  We have previously featured the band on Tradconnect.  The members are Caroline Keane on concertina, Daoiri Farrell on Bouzouki, Robbie Walsh on bodhrán and percussion and Tom Delany on uilleann pipes and whistles.  Here is their message.

'Hi we're FourWinds.  We're an Irish music four-piece and we've been working on our debut album for the last 7 months and it's going great!

The tracks are recorded and we are now raising funds to complete the process: mixing, mastering and duplicating mainly!  This album would enable us to get on the road and start performing around the world 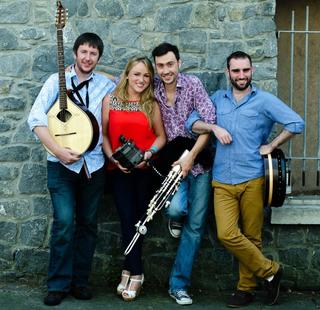 reputations but this is our chance to show what we can do together!   The album consists of 11 tracks, reels, jigs, hornpipes, hop jigs, slides, polkas and songs both traditional and original compositions arranged in a modern way but still respecting the rich Irish tradition.

We  recently budgeted that we need over 2500 euros to cover the costs of the mixing and mastering, as well as the design of the album and the duplication of the first 2000 copies.

We're very excited about finishing our first album as band, it is the results of long hours of practice, discussions and endless fun! we hope you'll hear energy, passion and devilment in every single track!

Every single musician in the band is as talented as the other and benefits the unique sound and energy of the band and as well as performing we also really enjoy teaching and giving as much as possible and having this album out would enable us to travel more and be part of  festivals and workshops all over the world!'

This is your chance to get behind the band.  Simply follow the link below to their Kickstarter Page