Talkin' Trad : An Interview with Edel Fox and Neill Byrne

Chatting to Edel Fox and Neill Byrne is quite an enjoyable experience. The bright and lively characteristics that exists within their music also seems to apply to them as individuals. They have just completed a busy Summer/Autumn promoting their new album called, appropriately enough, The Sunny Banks.  It is without doubt one of the best traditional albums of the year, with great tune selection being the engine that drives it on.  When you get this element of an album so right it shines ever so brightly across the tracks and gives an immediate wow factor to proceedings. You simply sit back and allow what they have created to invade your senses, assured that you are listening to something special.

Conal O Grada at one of the album’s launches during the Summer referenced the fact that “he would go back to it” when looking for tunes.  The word “Classic Album” or more specifically “classic fiddle and concertina album” also entered my thoughts and I couldn’t help but re-listen to Noel Hill and Tony Linnane’s classic 70’s album.  It is a solid reference point when it comes to concertina and fiddle duets.  With these thoughts in my head I asked Edel and Neil were they conscious of other people’s perceptions with regard to tune selection and the fact that the album may be viewed as a classic in years to come.  The closeness of the duet sound comes no doubt from years playing together, strengthened by the fact that they are also in a relationship with plenty of time to pick the tunes.

“There is the big advantage in living together” Neill says.  “We are constantly buying loads of music books that we reference. We would often be sitting at home watching telly getting bored fairly quickly.  You could be sitting there, flicking through books with one eye on the TV, and assessing tunes at the same time.  We have lots of books with dog ears and at the end of the week we’d go back and there might be 20 tunes that we would narrow down to five or so.  We are a bit nerdy that way, and yes, people have picked up on the tunes we selected when listening to the album.”

"Recording is like a piece of art and you sometimes have to know when to let it go. You have to be able to say, it is what it is."

The playing, learning and practising of the selected tunes was also given careful attention.  The recorded tracks needed time to settle down with regard to versions and ornamentation. Edel states that “for about 2 years we have been learning tunes with a view to recording them.  Obviously it’s just the last six months where we really put the heads down and said let’s do this, let’s make a CD and have it ready for the Summer.  It has been talked about for that long”

On the issue of classic albums it is important to point out that Edel’s teacher in her early years was Noel Hill and she is still in awe of him.  Edel and Neil reference the above mentioned album with Tony Linnane as having a major impact on them. They approached their own recording with a view to it being played 30 years later.

“For us this recording is like a piece of art and you sometimes have to know when to let it go. You have to be able to say, it is what it is. The things that we are noticing such as a tiny little slipped note or a tiny semiquaver missing from a triplet had to be forgotten about.  What we wanted to do with this recording was to make it sound raw and natural.  We are practiced musicians and we work hard at what we are doing but the best music happens when you don’t plan something and you have that element of spontaneity.  That is what you will find within The Sunny Banks.

They wanted an album that was easy listening.  Something that could play away in the background, pleasing more than just musicians.  Technically and skilfully they will always be seeking to impress but this never gets in the way of trying to create the best traditional music that they can.  The feedback that they have received has been hugely positive.  Edel states that at the Willie Clancy week this year they were completely bowled over with the positive response from their musical peers.  “Having other musicians say how much they enjoyed it, or how they love the selected tunes is great.  This makes it all worthwhile.  And more importantly to have older respected musicians coming back to you and giving you good feedback, like Joe Burke and others is just the best thing ever.” This is as pure a traditional album as you will find.  All tracks are instrumental and the requirement to add songs never arose.  This was part of the plan and while they appreciate a lot of the modern touches they decided to stick to their vision.  They also stood by a slightly older recording technique during the recording process.  Edel confirms that they “recorded it in Donal Clancy’s studio in Waterford.  He records on an analogue desk and I love the warmth that it brings,” she says.  “It’s an older sound.  There is probably not much capacity for tweaking but we wanted to keep that live sound. Everything was generally live, with the exception of Richie Lyons who came in at the end on bodhrán.  You can’t knock what is going on with modern music technically.  A lot of the work is great but it’s not what I would be after as such.”

“Everything we have done in the past has been very much rooted in the tradition.  We have recorded some previously unknown tunes on this album but they are also very much rooted in the tradition.  It’s really about each to their own.  As regards the two of us there is a certain type of album that will never grow old in your stack of CD’s so it’s good to create something timeless.”

"There is a certain type of album that will never grow old in your stack of CD’s so it’s good to create something timeless.”

Moving on from the album we noticed from Edel and Neill’s touring schedule in the US during the Summer that they included a number of house concerts.  The concept of a house concert has never really taken off in Ireland and it leads us to discussions on the general state of the industry, the appreciation for live music and artists generally.  Edel sheds some light stating that “people are very slow to pay you for a gig in Ireland.  It’s becoming increasingly more difficult to actually be a touring musician.  There is just so much music freely and readily available at the moment.  This is my eighth Summer going to America on tour and I have done a lot of house concerts over the years.  I think because music is not so freely and readily available in the US it makes people more appreciative and willing to travel to a gig.  I mean I would go to a house concert if someone organised it.  It’s a lovely enjoyable thing where people bring some food and drink and you all sit around and listen to a performance in a lovely intimate setting.  I think that it would work really well.  At some of them you could have 60-70 people, and in other houses we have done performances for 20-30 people.  These have been some of our best nights to be honest because you almost get to know the entire audience over the course of the evening.”

“General attendance at concerts in this country is very poor” she says. “Some people have this idea that if they see you play in a pub session it is the same thing as going to see you in a concert. In a way you have to make the distinction between concerts and sessions and hope that people understand it as well” 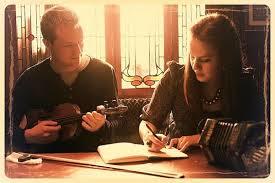 “I have played in nearly all the venues for traditional music around the country over the years, on my own or with others and I find that we have the most beautiful venues around. Our tickets are not that outrageously priced. €15 is an average price.  People think nothing of throwing €15 over a counter for 3 pints. However even at these levels attendance is not great.  You could be playing in a venue and next door there may be a pub with a band playing for free.  I know that people these days are making clearer choices and are being careful with their money but in general live music in this country is struggling”

To close out our discussion we ask about sales and her use of online media.  “The majority of our initial sales were at the Willie Clancy Week and were physical CD’s in the shop at the festival” Edel confirms.  “Custy’s Shop in Ennis has also been a great source of support over the years. Most of the sales online are via Custy’s and they have sold globally with people buying the physical copy. This time around we will also be looking in depth at online sales and the advantages it can bring via lower costs and reduced postage etc.”

The Sunny Banks is now on sale and can be purchased at www.edelfox.com and www.cdbaby.com