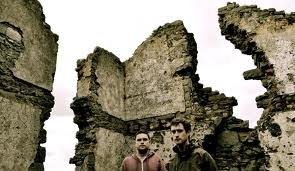 On our last outing with Jack Talty we were exploring his duet album with Cormac Begley called Na Fir Bolg.  It was recorded in 2011 and was an outstanding album by any measure of the tradition.  Hard core traditional, with an atmospheric reverberation as deep as the walls St. Nicholas’ Collegiate Church in Galway where it was recorded.  Multiple concertinas, some great tunes and little need for editing or multi tracking. A hard act to follow. I expected that his next recording would follow a similar path and I was a bit off the mark I have to admit.  He has once again partnered up, this time with flute and bass player Neil Ó Loghlen on a project called Ensemble Ériu. Whilst still referencing the traditional music that has been their life, they take a more expansive view of the tradition.  They surround familiar melodies with an alternative palate of musical colour and accompaniment and this leads us in an entirely new direction.  The music grows “organically” as they describe it and across the six tracks that make up the album this group of traditional and jazz musicians have made a bold and thought provoking statement.  The album was released in November and has already received critical acclaim. We caught up with both Jack and Neil to talk about the creative process on this their latest project.

We start with the difficult question and put it to Jack that this new approach to traditional music may be a turning point. It shows that there are new territories to be explored in a music that has stood still for a significant amount of time. So will this be a new dawn?  Will this experimentation be well received by those within the tradition, especially those that are more familiar with him as a traditional musician? "It doesn't really bother me how people perceive this Ensemble Ériu project.” he says.  “It was very much a personal journey for us.  People often refer to purists and the 'trad police' when they ask me about how I think that this album will be received but I don't think about that too much to be honest. The ‘purist’ notion is a bit vague anyway. In my experience so-called ‘purists’ have not always been grass-roots musicians who get stuck in and play Irish traditional music; they often seem to be self-appointed experts or gatekeepers. On the other hand it frustrates me that some of my favourite musicians are labelled as purists or the 'trad police' when they aren't; they just like what they consider to be good Irish traditional music. I wouldn’t be too negative about it all though; we need those kind of interactions to maintain the same healthy artistic tensions that all art forms have.”

We put it to him that his body of work up to this point, both on record and behind the mixing desk, would have led many to believe that he was in the “purist camp.” He agrees but points out that “It's all a bit irrelevant really. People vote with their ears ultimately and that's how tradition works. It's possible that the people who label this album as untraditional and impure have invested less time and effort learning traditional music than we have. I think the type of engagement with traditional music where you have stayed up all night playing with some of your favourite traditional musicians, of all ages gives you a certain confidence to experiment without fearing that you are compromising what people call ‘the tradition’ in any way."

As to the evolution of the project it would be fair to say that it pays due respect to the tradition and musicians that have inspired it.  Neil points out that “The main inspiration behind it is the music that we have grown up with in County Clare. The music and playing of Willie Clancy, Bobby Casey and Micho Russell influences the group in the choice of tunes and style of playing. However much of the arrangements and ideas are inspired by other sources including Bill Evans, Steve Reich, Nico Muhly, Maurice Ravel, Dirty Projectors. Instead of trying to put these other more contemporary sounds into the traditional Irish material we try to use our experiences in other styles of music to let them all converge organically into something very personal”

Jack’s agrees and one can see how this meeting of musical minds evolved.  Jack is likewise clear that he has not tried to change the way he thinks about traditional melodies or traditional music performance which is something that is central to this project. He felt that “it would be interesting to play traditional music with an aesthetic that is familiar to us but to experiment with a new type of accompanying sounds influenced by elements of minimalism, electro-acoustic music and jazz. We tried not to superimpose styles on each other but instead, allow arrangements to develop and grow organically. Some of the minimalist patterns and ideas were influenced by the idiomatic phrasing or melodic variations of people like Micho and Casey for example. I can't say that I'm huge fan of fusion per se but this attempt was a bit different; it just seemed a bit more natural than trying to combine conflicting aesthetics.”

Neil and Jack went to secondary school together and have worked together since in various guises. Jack met Jeremy Spencer (fiddle) and Úna McGinty (fiddle, viola) while studying music at UCC. The rest of the musicians comprising Matthew Berrill (clarinet), Matthew Jacobson (marimba, drums), Paddy Groenland (guitar, Sam Perkin ( keyboards ), Colm O’ Hara ( trombone ), and Saileog Ní Cheannabháin (voice) were introduced through Neil from his work on the Irish jazz scene.  Jack and Neil worked on the material together for a period of time and then brought the ensemble together to rehearse for the recording project. “Fortunately our recording project was supported by the Arts Council.” they confirm.  “It would not have been possible without this funding considering the size of the ensemble.”

Neil worked with many of the above musicians before on various projects. “They are friends” he says.  “They share the same view on music and creativity. Even though many of them are jazz or classical musicians they all have some background and interest in Irish traditional music. When orchestrating the pieces for the recording many of the instruments used were ones that we knew would blend well with the more traditional instruments and also would give a certain colour and texture that we were looking for. So even though many of the instruments were specifically chosen, the personalities of the individuals is very important. In many ways this idea is very much like how a jazz composer would go about choosing a group of musicians”

Jack explains what makes this project so different to his previous work.  “It is much more experimental than anything else that I have released, which has been mainly focused on straight-ahead Irish traditional music. I think some people would be surprised that this album features the same person that recorded Na Fir Bolg with Cormac Begley for example. It's not that strange to me personally as I believe it's possible to express an artistic voice that underlies and unifies all the work that you do, even if that work is seemingly incompatible as a whole at first listen. Many Irish traditional musicians have been doing that for decades. I think Martin Hayes is a good example of this.”

For both of them the development of this album and project came from within.  It was something that they had to do and they do not hold any mightier aspirations for it.  It’s part of the creative process and a fork in the road that had to be followed when they encountered it. Far from leading them away from the tradition it seems to have added to their knowledge and may inform future recording in a much more subtle manner.  “I wouldn't consider this album as a personal turning point or a statement of where I think contemporary Irish traditional music should be” Jack says. “Irish Traditional Music as a genre doesn't necessarily need this album to come along and make it more interesting - not for me anyway, but I'm glad that it contributes something new to the contemporary Irish traditional music soundscape.” 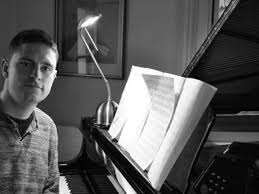 So if traditional music doesn’t need it, then why do it? Is it just a matter of pushing the boundary or envelope of the tradition to see what falls from the tree? “I think that pushing boundaries for the sake of it can result in pretty dull musical outcomes in my experience.” Jack says.  “I think it is more important for a musician to follow whatever it is that inspires them musically. I suppose we all only live once and we have an opportunity (or some would say a responsibility) as musicians or artists to leave a musical mark or a legacy of some sort but I think that it is more important to be yourself and express whatever it is that motivates you musically. That way, you can do what interests you and you will still probably contribute something new at the same time. I have met many exciting people who do believe in having a creative responsibility to innovate at all costs and that's perfectly acceptable but that's not what inspires me musically.”

“Sometimes musical parameters allow you to be a lot more creative than the blank canvas does, even if it sounds a little contradictory. The Ensemble Ériu album did not begin as a blank canvas for example. Also, some of the at-all-cost-innovators that I have encountered throughout my musical life are obsessed with the processes of pushing boundaries but have been much less enthusiastic about engaging in the tedious journey of learning a musical tradition, whether that is Irish traditional music, jazz or the western classical tradition.”

Ensemble Ériu is an album that is worth hearing and you can read our review for further information.   So far the group have organised a couple of launch gigs. The first will be in Charlie Byrne's in Galway on November 18th and the second will be in The Back Loft in Dublin on November 21st. “We are happy with the album but we are really a live band” they say in closing out this discussion. Book your tickets early and check their website for updates.

The album is available from www.ensembleeriu.com