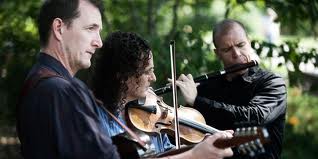 I attended a performance of the Teetotalers last night at the University of Hartford in Hartford, Connecticut.  Having heard all three players on numerous times I was well expecting the evening to be a grand night of entertainment. What I experienced was pure enchantment.  This was Irish trad in its absolute best form.   I could write about Martin’s lyrical fiddle, Kevin’s pulsating flute, or John’s driving guitar.  You might want the playlist of tunes and songs to help you imagine what it was like to be there.  I could attempt to retell the stories or jokes. None of this would be sufficient enough to conjure up the magic that I felt.   You had to be there.

Why was this show different from the many others I have seen each of them perform at other times, including Lunasa, Hayes and Cahill, Solas?  Well, for starters there was the buzz of anticipation.  Everyone was sure they would have an enjoyable time, but there was some sense of wonderment as to how it was going to happen.   This was true for both audience and musicians alike.   The lads seemed as mesmerized with the moment as any of us. It was the embodiment of musical friendship… a connection across time and place.

I really don’t have the words to describe what happened.  I often think about music as a spiritual process.  In my own playing I strive to make that connection.  Last night it happened on a grand scale.