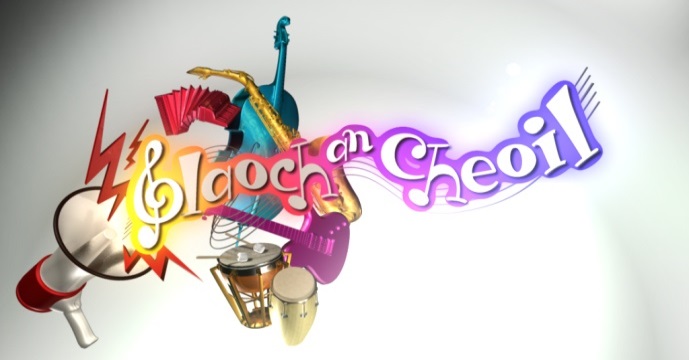 Imagine an Ireland where everyone in the country has the chance to learn to play a musical instrument, from the fiddle to the guitar, the drums or even the saxophone. This is the driving ambition of Glaoch An Cheoil, a brand new series for TG4 produced by Mind the Gap Films.   In Glaoch An Cheoil 4 top Irish musicians are spearheading a campaign to put the hundreds of unused instruments around the country into the hands of eager learners and prepare them to play at a concert for the President himself at Áras An Uachtaráin.

The project is based in 4 provincial centres around the country and each area has a well known musician acting as a mentor, inspiring the community to get involved. Clondalkin in Leinster features Colm Ó Snodaigh from Kíla as the regional mentor, Gweedore in Ulster has  fiddler Liz Doherty at the helm, Belmullet in Connacht with box player and Ragús man Fergal Ó Murchú leading the pack and Ring in Munster with renowned flautist and fiddle player Johnny McCarthy mentoring the aspiring musicians. Back in Springtime the mentors put out a call for local people to loan or donate a musical instrument that they were no longer playing, so that someone else could learn how to play music. They were hugely encouraged and energised by the response they received. People came from the highways and byways to the project centres with all manner of instruments.

These instruments were given a new lease of life and put into the hands of people who always wanted to learn how to play but never had the opportunity. Since then, local music teachers have been volunteering their time to help these eager learners develop a new skill. The results have been inspiring.

The Glaoch an Cheoil learners and teachers come from all over the country. In all of the centres there are people learning various instruments including guitar, flute, whistle, banjo, cello, concertina, button accordion, fiddle, piano, mandolin and drums, clarinet, dulcimer and even digeribone! People who felt that music had passed them by flourished when given a chance to learn to play later in life. Some even busked on the streets during the annual Waterford Harvest Festival, on Grafton Street in Dublin and at the All-Ireland Fleadh in Derry! 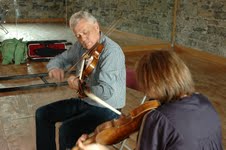 Towards the end of the series, all of the aspiring musicians will perform in a community concert in front of an audience of their supportive family, friends and teachers. Each mentor must pick just two people from each area who best embody the spirit of the Glaoch an Cheoil project. The chosen eight will then get the chance of a lifetime – to perform in Áras an Uachtarain in a special gala concert for President Michael D. Higgins.

Glaoch an Cheoil is a heart-warming and inspiring new music series not to be missed!

This 8 part series starts on TG4 on Thursday 7th November at 9.30pm and will run until St. Stephen’s Day.