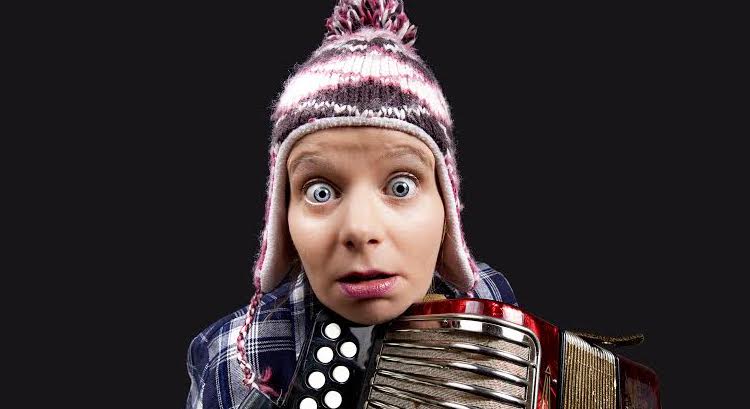 Via RTE Culture. Writer and actor Sharon Mannion writes for RTE Culture about her Drama On One presentation The Curse of the Button Accordion

The Curse of the Button Accordion is a comedy about me, my life growing up in rural County Roscommon and my accordion called Frank, who I’m convinced has me cursed.

Growing up, I was a worrier. I worried about everything from the end of the world to the third secret of Fatima. I didn’t think much of it at the time but looking back, it’s amazing I ever managed to leave the house. It never once occurred to me that this anxiety might be something I was doing to myself.

When I started to play the accordion, at first, I loved the attention, but it soon became clear I wasn’t very good. My fingers sweat profusely whenever I went near it, I couldn’t remember even basic tunes and one night I froze onstage during a big competition. I blamed Frank for all of this and eventually for everything else that went wrong in my life too. My Dad had played the saxophone in a showband called The Hawaiians in his younger years, and I convinced myself I was under huge pressure to become the next great accordion player, not least because my name sounds a lot like Sharon Shannon. It sent me into a bit of a tailspin and this show is essentially a heightened version of everything that transpired. I’d love to say the Sharon in The Curse if a far more lunatic version of me but unfortunately that wouldn’t be entirely accurate….

The idea of making the show had been swimming around the outer reaches of my brain for a good few years and when the Scene & Heard Festival put their annual call out for new work in 2016, I knew it was now or never. I had just had my first baby and was desperately seeking a path back to my creative self. So, I spent a few months writing and debuted a 30-minute segment over two nights in Smock Alley. It gave me just the push I needed to pursue the idea.

Over the following 12 months, I completed the show in its entirety and presented it over two nights in Roscommon Arts Centre. The show is so Roscommon-centric, it was a real joy for me to present it to a home crowd. Since then, I’ve toured it nationwide and of course created the radio version, beautifully edited by Gorretti Slavin.

I’m continuing to tour it, and what I’m learning is that people are relating it to their own experience of growing up. Maybe they were forced to play the recorder or to dance, or maybe they just had a weight of expectation on them that was put there by no-one but themselves.

Essentially, it’s become clear to me that everyone has their own ‘Frank’.

There’s a quote I love: Often, the more personal something is, the more universal it is too.

Drama On One: The Curse of the Button Accordion, RTÉ Radio 1, July 1st at 8pm

For all your Culture news visit RTE Culture