The folk, pop and trad fusion of Flat Out - New video plus interview This is the new video by a four piece, multi-instrumental group from Ballina, Co. Mayo called Flat Out. They formed just over three years ago for what was supposed to be a ‘one-time gig’ as a five piece on St.Patrick's Day in Austria. Since then they have been developing and growing.

This track takes them some way from their more traditional roots but shows that their sound has most definitely developed. The traditional instruments are there but are being deployed in a much more pop orientated manner.

“Our music is undoubtedly rooted in traditional music as all four us grew up playing with our local Comhaltas group “Gort na mBo: Bofield CCE”. Our early influences as young musicians were deeply set within traditional music thanks to our music tutor, Peter Neary. From as far back as we can remember we have all been playing and surrounded by music. We would regularly attend sessions organised by the Bofield Comhaltas branch, where musicians from all ages would be playing together.”

Ciara and Mark O’Donnell, first cousins and neighbours, were heavily influenced by Mark’s father, Martin O’Donnell, who had being playing music for many years both in bands and as a “one man” act. Growing up, both were heavily encouraged to play with the rest of their family at various gigs and events all around Mayo and neighbouring county Sligo. It was at this early age that the pair were exposed to folk ballads and a broader genre of music, as they encountered many musicians and singers who would do a party piece during their gigs.”

Similarly Bríd’s farther, Jimmy, is also heavily involved in the music scene and has been a big component in Bríd's love of music and often played at regular sessions with her family and neighbours growing up. One of these neighbours included, fellow band mate Harry Lawlor.

“With regard to ‘crossover’ music, like every other teenager growing up we listened to the pop music of that time. Ciara and Harry also attended singing schools which enabled them to perform songs from different genres and therefore increase their repertoire.”

“Recent traditional bands such as Lúnasa, Kíla and Beoga to name a few have been highly influential to us, however we also love covering modern artists such as Fleetwood Mac, Kings of Leon and Florence and the Machine. So you can see how the crossover came about.”Three years ago Mark was approached and asked to organise a number of musicians to perform during the St. Patrick Day celebrations in Klagenfurt, Austria. Having been playing on and off acoustic gigs for a few months previously, a group of 5 travelled over to perform. “When we returned we felt we had created something special and decided to see where the road would take us,” he said when we spoke to him. 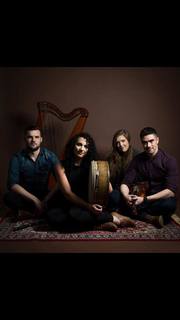 "We were very lucky with the support from home as before we knew it our diaries were full! We made a number of successful YouTube videos, with one video ’99 Red Balloons’ receiving over 74,000 views. We travelled to Germany that summer (2013) where we performed at various festivals. After a few months the group became a four piece. Determined to keep going, in March 2014 we entered a national cover competition called ‘Le Crunch Apple of my Eye’ in association with Today FM. Out of 1000 entries, we were crowned winners with our cover of Foster the People's “Pumped up Kicks”.

It was on a tour in Florida that they decided to concentrate on more original material. When they returned they began to work on an EP immediately. Over the next few months they had written, recorded and produced their first original work entitled “Half Empty Half Full,” which included four original songs.

The recording of the EP ‘Half Empty, Half Full’ was undoubtedly a learning curve. “We are all relatively new to the process of writing and recording. We spent a lot of time creating and changing this EP to ensure we’d have something to be proud of. Writing and especially performing your own material can make you feel pretty vulnerable and this was and still is a big change for us, having originally performed cover songs. As regards our view of our place in the trad/pop scene we were left wondering if we were too trad for the general public, or not trad enough for the scene that we had grown up with. Thankfully we have received good feedback from all sides.”

“We are still in the process to finding the name for the style and genre of music we play. We are clearly influenced by trad Irish music, with elements of folk and pop added into the mix. We don't feel musicians or artists ever stop growing and learning. Our sound as Flat Out is still developing.”

Find out more by visiting www.flatoutmusic.com and find their EP on iTunes