Over the last couple of weeks we have featured a number of articles that highlight The Gathering traditional music festival which takes place in Killarney, County Kerry this week.  The festival runs from this Wednesday 18th through to Sunday 22nd. We have already interviewed Matt Cranitch about his new album and his upcoming concert.   Another artist appearing is Caoimhín O’ Fearghaíl and we spoke to him briefly about his forthcoming appearance.  He performs on Sunday 22nd February with some long term musical friends.

“I have only played at The Gathering once before, with Danú”, he says.  “This year I'll be sitting in with Paudie O'Connor, Liam O'Connor and Seán McKeon, three musicians I have the greatest respect for.  I love their music and I hope I'll do them justice playing with them. I have played with them all at various festivals and in sessions, but never all together in a concert like this.”

Caoimhín is a multi-instrumentalist and has appeared on a number of classic albums over the last few years.  The fact that he appears in many instances as an accompanist keeps his name under the radar.  However the quality of music that he contributes is outstanding, both on his own albums, and on releases by other artists.  Within our own archive of featured tracks his name is connected with some of the best music around, and we don’t say that lightly.

Dealing with his own music first, in 2013 he released what was for me one of the best albums of the year. It was called Lá ag Ól Uisce and on it he was joined by Tomas Ó Gealbháin on accordion and Seán Ó Fearghail on fiddle & bouzouki.   Caoimhín covers many instruments including uilleann pipes, flute and guitar.  At the time of its release I wrote that “Lá ag Ól Uisce for me is one of those albums that comes out of nowhere and is an absolute gem.  It is so laid back, natural and traditional that it should be an inspiration to any budding musician that needs a level to aim for.  You may not reach it but at least the sound will be resonating in your ear.  Bobby Gardiner in the sleeve notes states that "these dedicated young players are now playing with an ease and maturity far beyond their years.  The music is unrushed, flowing, rhythmic, sincere with good key changes and tasteful decoration".

Regarding that album Caoimhín recently said to us that “we were surprised and very pleased with the positive reaction we received following the release of the album”  To give you a sample of the music, here is a track that we added to our archive on Soundcloud.

Were that not enough, in the same year Caoimhín provided the accompaniment to Caitlín Nic Gabhann on her outstanding concertina album called Caitlín.  That album went on to win the Tradconnect Album of the Year Award for 2013.

Continuing the concertina theme in 2014, Caoimhín once again provided the accompaniment to Edel Fox and Neill Byrne on their album called The Sunny Banks.  That album also went on to win the Tradconnect Album of the Year award for 2014.

It is also worth noting that Caoimhín, Seán McKeon and Liam O’Connor are all past winners of the TG4 Gradam Ceoil, Young Musician of the Year award.  In 2013 Séan McKeon released another classic piping album called To The City.  It also featured Liam O’Connor who will perform at The Gathering with Caoimhin on Saturday 21st.  Here is a track from that album featuring Liam O’Connor and John Blake on guitar.

With regard to the year ahead Caoimhín says “I can't say I have anything big planned for 2015! We'll see what opportunities arise and I'll play it by ear. A few festivals alright.  The first is our local festival at home in An Rinn, Co. Waterford - Tionól Niocláis Tóibín, which has just finished. It was an absolutely great weekend with plenty of singing and tunes! Next up is The Gathering in Killarney next weekend. I am then heading to the US at the end of February for a 3 week tour with Caladh Nua which should be great.” Caoimhín features on the new Caladh Nua album which we launched online earlier in the year. It is called Honest to Goodness

Then at the end of March Caoimhín is involved in a great day of workshops and a concert up in Celbridge, Co. Kildare, called Ceardlann an Earraigh. www.ceardlannearraigh.com 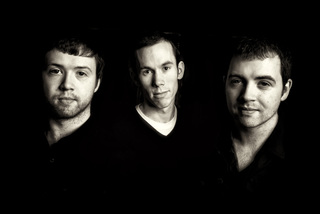 “Cruinniú na bhFliúit in Ballyvourney, Co. Cork, is next, he says. “It should be a great blast of flute playing! www.flutemeet.org  I can't forget to plug the Dungarvan Tradfest either which would be on the June bank holiday weekend. And I can't not go to Miltown Malbay for Scoil Samhraidh Willie Clancy - always one the highlights of the year for me! I recently got a call to teach pipes and flute at Meitheal this year on 20th-24th July. Who knows what else will pop up between now and then!”

“Apart from all that, there'll be plenty of sessions at home and wherever the road takes me. I also play and sing with Cór Fear na nDéise, a men's choir from home and I'm sure there'll be a few outings with them as well which I always enjoy. Some of the best male singers from the locality sing in the choir which is a delight to hear.”

With Caoimhín involved with so much great music over the last few years we ask him his view on the state of the tradition.  “I think Irish music is very healthy at the moment” he says. “There are more people playing than ever at such a high standard. So many people today have great technique, but I think some, who won't listen to the older musicians, are missing something. You can't be stuck in the past either of course. You have to appreciate it all, the old and the new, and take the best from it all in my opinion. And you never stop learning, no matter how old you are!”

With the sales of both hard copies and digital downloads struggling in an ever changing industry Caoimhín remains positive.

“I suppose it is tough enough but there are always people who prefer to have a hard copy of an album, especially if there are good notes in the sleeve of the album. I personally enjoy reading where people got their versions of tunes from and any stories behind them, and of course the words of songs, all of which you don't get when you just download an album from iTunes."

Caoimhín will be on stage at The Gathering on Saturday 21st February at 8.30pm.