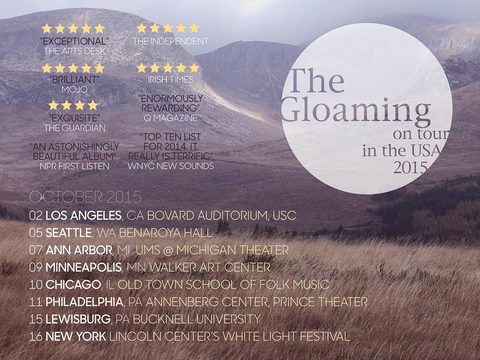 Martin, Caoimhín, and Dennis have been recognized for extending the Irish and Celtic music traditions – both literally and metaphorically, balancing traditional rigor with an energy that seems entirely new. Thomas has been identified with the independent rock scene for his work with artists as diverse as The National, Glen Hansard, Antony and the Johnsons and old friends Nico Muhly and Sam Amidon. Iarla has sung with projects as far afield as “new music” composer Donnacha Dennehy’s Nonesuch debut and the electronic/world-music hybrid Afro-Celt Soundsystem, the second bestselling artist in the history of Real World.

The five met in early 2011 to explore a new musical direction at Grouse Lodge Studios is West Meath, Ireland. The musicians discovered a shared musical aesthetic that transcended the genres for which they’ve become known. Says Iarla “We came to the conclusion that our identities were more tied up in the individual sounds we made rather than any notion of being a culture bearer.”

Adds Thomas: “Maybe The Gloaming works so well because I don’t recognise the lines that the rest of this band sees. They’re very happy to go outside of those boundaries, but the fact that I don’t even know the tradition helps make them disappear.”

In the brief period of time since their formation, The Gloaming have become a much-heralded live draw in UK and Europe – playing to capacity crowds  in the world’s most prestigious venues.

The music they make is ephemeral yet furious, pairing memorable, yearning melodies with a progressive style. The group hearkens back to some of the most most unexpected success stories of the late 90s – when the amazing backstories and largely instrumental sound of artists like Buena Vista Social Club and Sigur Ros helped the niche genres of Afro-Cuban music and post-rock to briefly break into popular consciousness. Imagine if alchemical music of a band like Tortoise could appeal to your old Irish uncle – and you have an idea of what The Gloaming are after.

Dennis Cahill says, “It’s the mark of a great piece of music, when it’s bendable, and it doesn’t lose its integrity, and I think the tunes we borrow from are spectacular like that, and that they can be played in a lot of ways.”