Sónta Films & Irish Music and Dance in London have announced that they will screen the landmark documentary called 'An Godfather' in London on 25th October 2015.  Actor Brendan Gleeson uncovers the extraordinary story of the life and music of the man they call 'The Godfather'. Leitrim fiddler player Brian Rooney emigrated in the late 1960s, at the age of 16, to England's largest city, London to find work. He came as a promising young musician yet today he has achieved global recognition within the traditional Irish music world. With a depth of astonishing music that provides the underlying sound track of his life, the big man with the ready smile and the lonesome sound is recognised as one of the master fiddlers of his generation who brought the heart of the tradition with him to London and kept it safe."

I myself was working in London in the late 1980's and like many people with an interest in traditional music ended up at an Irish Center in Queens Park called Áras na nGael. It was run at the time by renowned Clare fiddler Brendan Mulkere. There, most Sunday afternoons Brian Rooney sat and played in sometimes neverending sessions. Brian's playing had an otherworldly quality to it.  His understanding and articulation of even the simplest of jigs made you feel that such playing was within your grasp and provided the motivation to continue on your own musical journey.  With that you would return again and again, slowly realising that you were in the company of someone really special, and for me, one of the greatest fiddle players I will ever encounter. 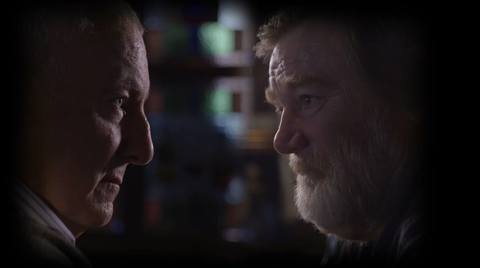 I recall at the time a certain disbelief amongst musicians that he had not recorded an album.  It was through the efforts of Gregory Daly, Tom Maree, John Carty and others that his debut recording was finally made in 1999.  He was in Dublin to give a rare public performance and following that a number of musicians including Brian McGrath, John Carty, Frankie Gavin and Alec Finn were quickly pulled together to make his debut called 'The Godfather'  It was recorded at LG Studios in Longford and it's release opened Brian's music up to a whole new audience.
It was Tom Maree who first mentioned to me the name 'The Godfather' and I am still unsure who first used that name, probably Tom himself no doubt. In the liner notes Tom says that "Brian's music began to stand out for it's sheer beauty and power and it's 'caoineadh' distilled from his musical memory and openness.  It is this that has made Brian such a powerful musical influence in London and indeed elsewhere, deeply touching many a musician who themselves have scaled the heights of traditional Irish music"
The press release for this new documentary says that "This special one hour documentary literally brings us on a journey, to explore how Brian came from that smallholding near the border village of Kiltyclogher, amongst thirteen siblings to a seemingly familiar emigrant life working in construction in England’s capital. This is both a physical journey and a musical journey and as the story of his life unfolds so too will the story of the unparalleled traditional Irish music scene which existed in London during the 1950s, 60s and 70s and is a much celebrated period in Irish musical history."

"Leading us on this journey will be actor and fellow fiddle player, Brendan Gleeson. Brian Rooney is one of his heroes and he has been yearning for years to find out more about the man, the music and that golden era in London. Through this journey we will get an insight into the man, his music and of the wider Irish experience of life in London. We will learn of his humour, generosity and willingness to share his story and the wonders of his music and of the influence he has had on other musicians particularly the younger generation and finally we will understand why this man is known simply as ‘The Godfather’."
And so we include Track 2 from his debut album. A set of reels called Tie the Bonnet/Galway Rambler, with Brian McGrath on piano.
It will be screened at RADA Studios, Chenies Street, London WC1, Sunday 25th October 5.30pm

Tickets £5 are available from 020 737 5060 orwww.rada.ac.uk/whats-on/other-events/an-godfather
a
You can also purchase album  'The Godfather' at www.cdbaby.com/cd/brianrooney or 'At Complete Ease' at www.johncartymusic.com