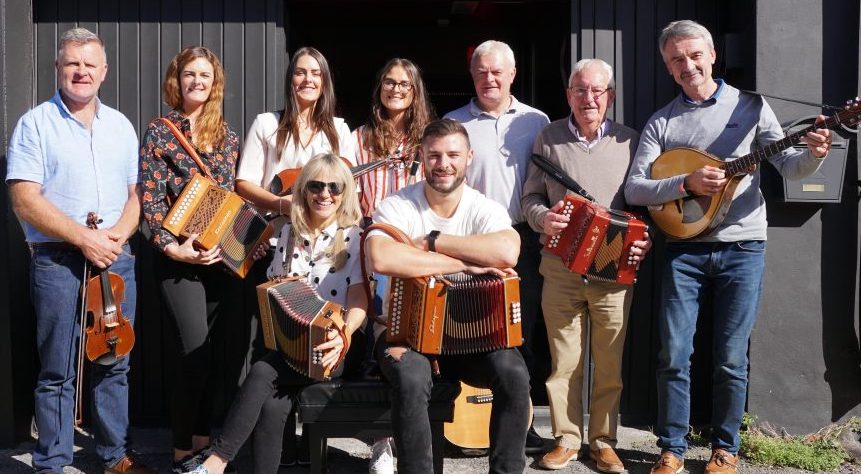 Picture it, the traditional music world colliding with the rugby world…it can only be a magical thing! The Henshaw Family, who are steeped in Irish traditional music heritage, team up with the queen of trad, Sharon Shannon, to record a very special album all in aid of the South Westmeath Hospice. Perhaps the most famous of The Henshaws is son Robbie, you may know him as an international rugby player and not who you’d expect to be a mighty fine trad musician! “The Secret Sessions” is an extra special session album, recorded in just one day at Dublin’s Camden Studios – recording started at 11 am and everyone was in their cars driving home at 5 pm. This is trad as it should be with the listener right at the centre of the musical scrum.

Speaking about her involvement with the album, Sharon Shannon said “Ted Quinn and his family have been friends of mine for many years. Ted played and sang in a band with Billy Henshaw (Robbie's grandad) for many years. Teddy's wife Ann passed away at South Westmeath Hospice a few years back, so he and The Henshaws wanted to make a CD to fundraise for the hospice that cared for Ann during the most vulnerable time of her illness.

Ted invited me to a session at a lovely country pub called 'The 3 Jolly Pigeons' outside Athlone early last year, and this was my first meeting with the Henshaw family. It was a great music session and seeing the whole family involved reminded me of growing up with my own family in a similar musical environment. They invited me to be involved in their family CD and I was delighted to be able to offer help. We rehearsed a few times during the summer during gaps in my touring and rest periods for Robbie between his Leinster and Ireland commitments. We eventually recorded the whole album in one day at Bressie's studio in Dublin. The Henshaws are all great musicians and it’s been a privilege to be involved in such a good fun project for such a worthy cause.”

Robbie Henshaw and his family were thrilled Sharon agreed to be involved. Speaking about the album Robbie said “ Music has been a huge part of my life since a very young age. Sharon Shannon was a musician I always looked up to and it is really special to have the chance to play tunes with her on this album.

Together, we are aiming to support and raise funds for the South Westmeath Hospice based in Athlone, who provide outstanding service and support to patients and families in the Westmeath and Roscommon area.”