The High Seas are a new trio made up of musicians Caitlín Nic Gabhann (concertina, dance), Ciarán Ó Maonaigh (fiddles) and Cathal Ó Curráin (vocals, bouzouki, fiddle) and they have just released their first self-titled album.

The band skillfully weave together the colourful strands of Irish music, song and dance into a tapestry of tradition, giving a sonic performance that is both playful and profound, ethereal and brooding.

On concertina, Caitlín Nic Gabhann showcases her deeply held love for music. From Ashbourne, County Meath, Caitlín is a regular performer at festivals and in concert halls from North America all the way to Asia. She is also an accomplished dancer, having toured the world with Riverdance, and brings her percussive beats to the stage with The High Seas. We have featured her music on Tradconnect over the years and in 2012 she won our Album of the Year award with her debut solo album called Caitlín.

In 2015 she teamed up with fiddle player Ciarán Ó Maonaigh who hails from the Gaoth Dobhair Gaeltacht. They released a duet album called  Caitlín & Ciarán which was again very well received.  Ciaran was heavily influenced by his extended family and the unique Donegal style of fiddling and he has recorded six albums, receiving great critical acclaim. His music has been used in films, on television and on radio programmes. Ciarán also works as a director and producer in the television industry, with a focus on music documentary. 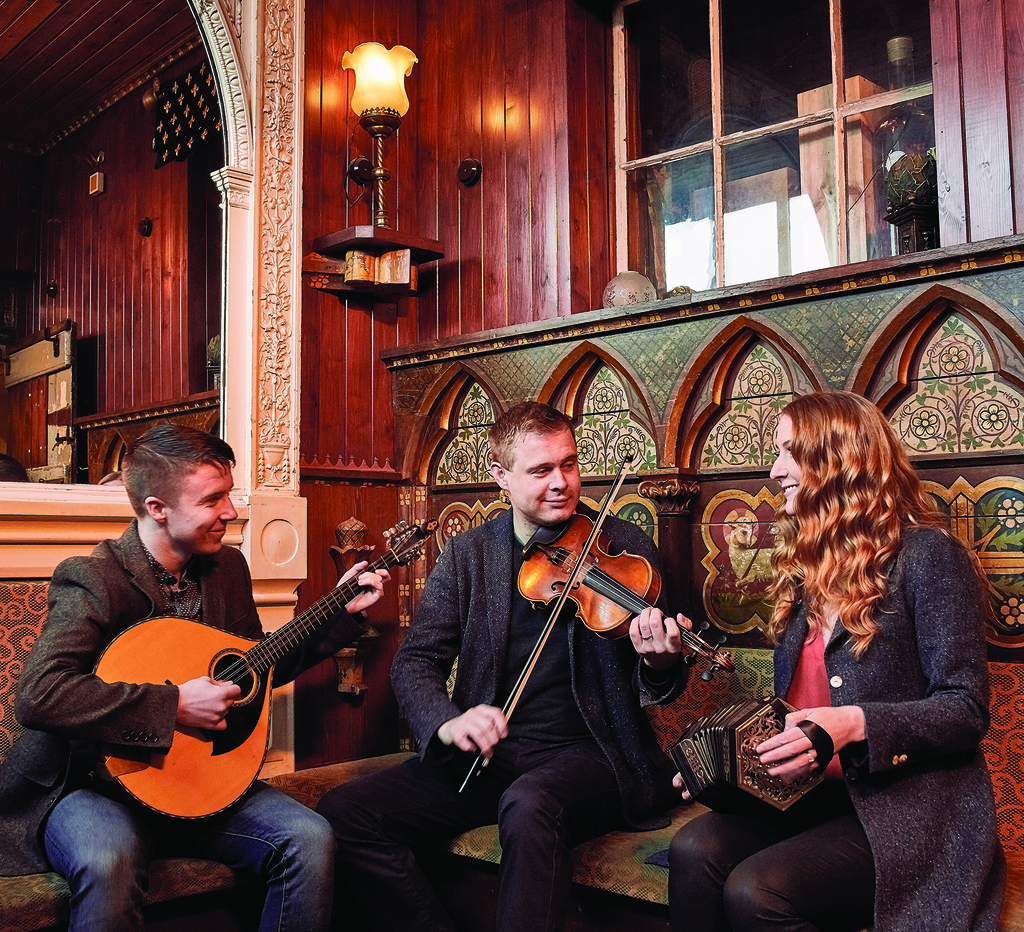 Cathal Ó Curráin is the youngest member of The High Seas at just 19 years of age and hails from the Gaeltacht of Gaoth Dobhair, Co Donegal. He was immersed in the song tradition growing up and his singing talents were nurtured by his aunties Bríd and Caitlín. Cathal also plays the bouzouki, banjo, fiddle and mandolin.

Our sample track includes three reels that are staples of the Irish tradition, commonly played in sessions. Christmas Eve happens to be the first tune Caitlín ever heard. They got the setting for The Abbey Reel from fiddle players Liz Carroll and Stephen Campbell.

When we spoke to Caitlín she said that the addition of Cathal has added so much to their live performances. “The whole thing feels like it's got a new lease of life now with both Gaelic and English songs alongside the tunes and dancing,” she said. “We had loads of new material and then decided that we needed a band name as opposed to being introduced by our three separate names. Then it was just a matter of getting into the studio and laying it all down. It all came together quite organically. Cathal fits in as if he's been with us a long time, and in a way he has. He is from Gaoth Dobhair and has been part of our social circle since he was a musical prodigy of only 8 years of age. People love songs, and when we combine them with stories, tunes and dance it gives a mix that really works in our live shows."

The album was launched recently in Amharclann Ghaoth Dobhair which is a newly refurbished 300 seater venue in the heart of the Donegal Gaeltacht. The next launch will be at the Willie Clancy Summer School in July there will be a tour to follow in the Autumn when they will also have a vinyl edition of the album available.

The album is now available from www.thehighseas.ie and it can also be purchased as a download from CDBaby.com