Imaginative and fresh debut from The Hydes mixing Irish, American folk and bluegrass Sister-brother duo, The Hydes, have just released an imaginative, fresh, and enthralling take on folk and roots music with their debut album Green & Blue, weaving creatively and decisively through an eclectic musical landscape of Irish, American folk, bluegrass, and beyond.

They merge these acoustic styles to create textured instrumentals and rich vocal harmonies in a way that speaks unmistakably of roots in Colorado and Ireland, as well as visits to places in between.

Guesting with them on this debut are a host of noted Irish musicians including Tadhg Ó Meachair (piano/piano accordion) and Colm Phelan (bodhrán) of Goitse, Alan Reid (banjo) of Arum, and Christina Dolphin (flute), as well as American bluegrass/jazz/folk bassist Eric Thorin.

From gigs in Nashville to Ireland, sold-out shows at home in Colorado and the Western USA, and most recently Iceland, The Hydes continue to expand their collective, exploratory musical scope. Joanna (fiddle, vocals) and Iain (guitar, mandolin, vocals) grew up in a musical family, traveling the USA to share their music at festivals, house concerts, workshops, and various concert venues from their primary school days onward.

This is Track 3 from the album called Land’s End featuring Joanna and Iain, with Eric Thorin on bass, Christina Dolphin on flute and Colm Phelan on bodhrán.

Brimming with curiosity and a sense of adventure for an array of styles, The Hydes have forged a path of musical experience that includes classical, Irish, Cape Breton, Texas swing, bluegrass, swing, blues, and classic American folk idioms. 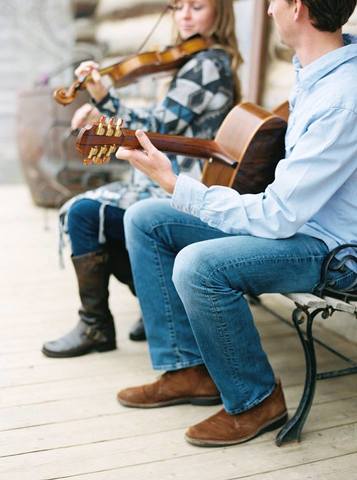 Their focus on Irish music first came by way of scholarships to the Augusta Heritage Center’s “Irish Week,” where they studied with James Kelly, Liz Carroll, and Antoin MacGabhann, as well as the late Jerry Holland of Cape Breton, who left an especially indelible mark as he stayed with them on multiple occasions and played many late-night sitting-room sessions in their Colorado home.

In the liner notes they say: “This album has been an adventure, a venture through many moments that share our ever-eclectic musical tastes...back to sing-alongs by the living room stereo and in the family station wagon - American folk, Motown, and classic rock 'n' roll that mom and dad passed along from their youth, further back again to the timeless swing of the 20s, 30s and 40s, the contagious ragtime that our mom played on the piano, local symphony trips and our first lessons in classical music, exploring festivals and workshops across the country that introduced us to bluegrass, blues, Texas swing and Irish music...and nothing beats a trip to the record store to find new music! The places we love and have lived, Colorado, Tennessee and Ireland, indelibly imparting their spirit...spanning all genres, and delving into any interest sparked along the way in a constant combining of old and new. We feel so lucky for this multitude of experiences, to embrace them here on our debut record, and to be able to share our love of music with you!”

The album has 10 tracks including two originals written by Iain himself, as well as two originals co-written with Joanna. And is now available to purchase on their website www.hydesmusic.com. It is also available available digitally on iTunes as well as www.cdbaby.com

Produced by Joanna and lain Hyde