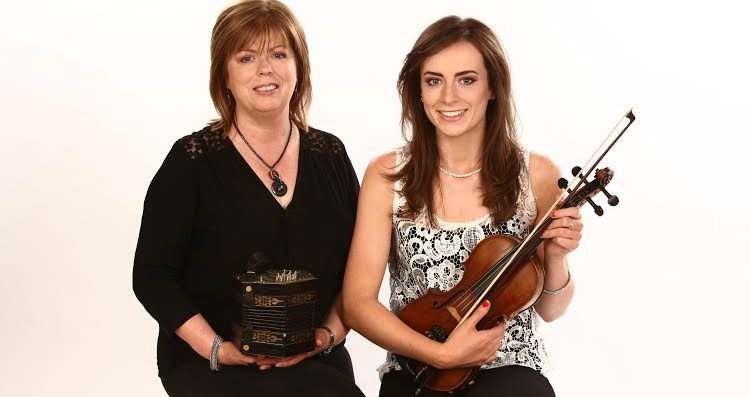 The Lady’s Cup of Tea is the new album from Co Clare concertina player Mary Mac Namara and her daughter Sorcha Costello on fiddle. This is the fifth album from Mary whose first album “Traditional Music from East Clare” (Released in 1994) was widely acclaimed and voted by the Irish Times as traditional music album of the year.

The following 3 releases were received with similar accolades and this latest album is no exception. Frankie Gavin has described The Lady’s Cup of Tea as “Sincere, hypnotic and an overall delight”.

Mary grew up in the east Clare village of Tulla which is renowned for its heritage of Traditional Music. She learned her music from some of the masters of traditional music such as P Joe Hayes (whose son Martin was Mary’s musical partner until Martin emigrated to the US in the early 1980s) and also the legendary piper and fiddler Martin Rochford.

On this album Mary is joined by her daughter Sorcha on fiddle. Mary and Sorcha have been playing music together since Sorcha was a young child. Over the years they have enjoyed an innate understanding of each other’s music. Following in her mother’s footsteps, Sorcha has won solo, duet and Ceilí Band honours at All Ireland Fleadhanna ceoil. In 2016 she trained the winner of the All Ireland solo fiddle competition under 12 – a cup which Sorcha herself won in 2007.

This is Track 1 from the album which includes The Steampacket / The Lady's Cup of Tea / The Humours of Scariff.

In the liner notes they provide a detailed background to the tunes. “Breathnach (Ceol Rince na hÉireann I, page 37), calls the first tune The Mountain Lark, noting O’Neill named it The Steampacket.  David Lyth transcribed James Morrison’s version (called The New Tobacco), complete with bowing marks, in Bowing Styles in Irish Fiddle Playing volume 1.  Its interchanging modality is a challenge for the accompanist. Joyce’s Old Irish Folk Music and Songs has a version of The Lady’s Cup of Tea called The Flurry Reel, commonly known as The Sporting Boys of Easter; the second parts are almost identical. Mary and Sorcha's version is tune 107 in Goodman's Tunes of the Munster Pipers volume l. The Humours of Scariff is said to be amongst tunes collected by O’Neill during a trip to east Clare in 1906 (his wife Anna [Rogers] was from Feakle). Lyth also notated east Clare fiddler Paddy Canny’s version in volume two of Bowing Styles in Irish Fiddle Playing, page 130, with Canny’s bowing.

This recording endeavours to capture the magical empathy that results from a mother/daughter musical bond. Both Mary and Sorcha also play solo selections on this album. Sorcha’s brother Pádraig adds to the “family fusion” in his accompaniment on two tracks. Geraldine Cotter provides wonderfully sensitive and tasteful accompaniment on all other tracks. 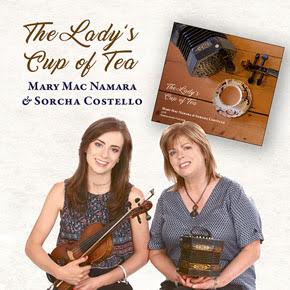 For those interested in East Clare music Mary’s provides some additional insight on her website. She says that “Much has been written and said about the music of East Clare in recent times and yet it would be impossible to define in words alone. To start with East Clare music is far more than the mere performance of an East Clare tune. There are a large number of tunes which are associated with the playing of East Clare musicians. In truth most of these tunes are versions of tunes played in other parts of the country. What makes them identifiably 'East Clare' is the style in which they are played.

But what makes up this style? It is an interpretation of music played by the people moulded by the environment of East Clare; does the music reflect the landscape - the mountains, bogs and meadows? I think that it does through the inheritance and experience of the musician.

The style is marked by the sparse use of commonly used ornamentation such as crans, rolls and triplets. A less technical type of ornamentation has developed, for example double octave playing and transmission of rhythm to the bellows through the foot tap in the case of concertina and melodeon players.”

This album is therefore a great opportunity to experience the pure drop of Irish music from East Clare.

The album is available to purchase from Mary’s website www.marymacnamara.net

Photograph of Mary and Sorcha by Aidan Sweeney

Printed and duplicated by duplication.ie