Upholding the best principles of the tradition - 'The Reel Note' by Mick, Louise and Michelle Mulcahy Musical families are often the backbone of multi-generational continuity within that global community, and no musical family today is more impressive in upholding the best principles of the tradition than the Mulcahy’s of Abbeyfeale, West Limerick.

Mick, Louise & Michelle Mulcahy play a dazzling array of instruments between them, but it's the sweetness and tunefulness of their ensemble playing that is most striking.

Their latest family album ‘The Reel Note’ has received worldwide acclaim, and is an album full of soulful traditional music. 2017 Gradam Award nominee Mick O’Connor knows the Mulcahy’s better than most, and provides an honest appreciation of their contribution to traditional music in the liner notes.  Regarding this album he describes it as “first class,” stating that the Mulcahy family is universally acknowledged in traditional music circles as extraordinary musicians. This album shows, “an implacable discernment, taste and respect for the continuity of the tradition,” he says. “The Mulcahy family represents a new generation of musicians who have made a serious study of the music and are poised to bring it to a new height. No gimmicks, syncopations or other distractions, just extremely good music played by exceptionally talented musicians, across a range of instruments, and all played to a very high standard.”

His connection to the Mulcahy family goes back to the late 1960s when Mick was working in Dublin and frequented the various music clubs. He says: “Mick was highly regarded by the musical fraternity at the time which included such luminaries as Tommy Potts, John Kelly, Sonny Brogan, Tony Mac Mahon and Scan Keane to name a few. Mick also played with the Castle Ceili Band on occasion. It was during this period that he came in contact with the fiddle player and composer John Dwyer, whose composition ‘The Fox in the Thatch’ features on the album.”

Our sample track from the album features the reels, John Kelly’s The Belles of Tipperary/ Patsy Touhey’s Rip the Calico/ The New Line To Loughaun.

Regarding this track they say: “John Kelly, the great fiddle player, hailed from Kilballyowen in west Clare. Mick knew John well, as he spent a lot of time in Dublin during the 1960s. John had a well-known shop on Capel Street which became a very popular shop for musicians to visit! This is a version of ‘The Belles of Tipperary’ that John used to play, a tune he also called ‘Cronin’s Reel’. ‘Patsy Touhey’s Rip the Calico’ is also known as ‘Jenny Dang the Weaver’ and it was recorded in 1976 by Jack and Charlie Coen on their album The Branch Line. It was also recorded by Peter Carberry and Padraig McGovern on their 2013 album Forgotten Gems. ‘The New Line To Loughaun’ or ‘Hanly’s’ is a tune associated with County Roscommon flute player Patsy Hanly. Patsy himself associated the reel with fiddler James Hanly of Newtowncashel, Co. Longford, who had learned it from a farm labourer named Eavers, who was known locally as a whistler and lilter.” 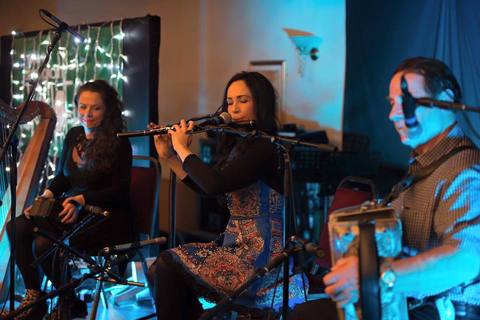 Each of the fourteen selections here is the tip of a pyramid of considered choice and is accompanied by a comprehensive booklet providing detailed background information on each selection. A look at the track notes will reveal their influences, sources and heroes, which include tunes and settings from the old masters as well as new compositions by Mick and Michelle.

Mick Mulcahy has a rare repertoire of old tunes which he plays in a highly distinctive style, a style of personal touch which distinguishes the work of the true traditional musician, a touch which has been passed down to his two daughters Louise and Michelle.

In the liner notes Mick O’Connor says that he complimented the Mulcahy family on their good taste in sourcing the music played on the album. Track 4, which features 'Planxty Davis', has nostalgic memories for him. He says: “I am old enough to recall Leo Rowsome playing 'Planxty Davis' in the Pipers Club on Thomas Street. Other favourites include ‘The New Line To Loughaun' or 'Hanlys’, a tune associated with fiddler, James Hanly of Newtowncashel, Co. Longford.”

Previous albums from The Mulcahy’s include Notes From The Heart and Reelin’ in Tradition recorded with Cló Iar-Chonnacht. As a family they have toured extensively throughout Europe, America, Asia, New Zealand and Australia. They have also featured on many television and radio shows around the world and Louise was recently voted Female Musician of the Year at the Live Ireland Music Awards 2017, while Michelle was awarded Tg4 Ceoltóir Óg na Bliana in 2006.

The album is now on release and can be purchased from www.cic.ie/en/music/ and it can be downloaded from www.cdbaby.com

A very special word of thanks to Cecilia for all her support and encouragement in making this album and for being a continuous source of inspiration. Many thanks also to Eoin and Ógie for all their support and good humour! Heartfelt thanks to Mick O’Connor for writing the introduction to the album.

Many thanks to the patient Tony O’Flaherty for a great week in the studio and also to Seán O’Sullivan! Thanks also to Ruairí O’Flaherty. Míle buíochas le Deirdre Ní Thuathail agus le gach duine i gCló Iar-Chonnacht. Déanann siad sárjab chun an traidisiún a chur chun cinn.

Thanks to Anita Sadowska-Horne, Sue Brophy and Ballymagarvey House, Balrath, Co. Meath. Thanks also to Francis Cunningham for the use of his Bb/F concertina.

All tracks arranged and produced by Mick, Louise & Michelle Mulcahy.