The Return of the Banjo 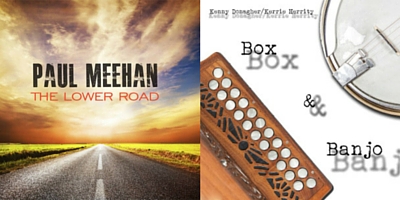 Banjo albums have been thin on the ground so far in 2015, with a few exceptions. The arrival of Paul Meehan's album 'The Lower Road' as well as a new release by Kenny Donagher and Kerrie Herrity called ‘Box & Banjo’ may just change that.

The Lower Road by Meehan is a very solid affair and it will be added to our Download Centre next week where it will be available to broadcasters to download for free to play worldwide. Paul has been a journeyman musician and collaborator over the years. He has worked with many of the industry’s big names and it is great to finally hear this solo release. He recorded two albums with Lúnasa and toured with them for seven years and brings all that experience to this recording.

Box & Banjo is an equally accomplished release that showcases the talents of Donagher and Herrity. Kenny Donagher is a native of Easkey, Co. Sligo and comes from a family steeped in music. Kerrie Herrity moved to Sligo and continues to teach and compose in what is becoming a vibrant music scene. The album features 14 tracks of focused traditional music that is a very welcome addition to this years releases. We will follow up with a track later and it may also find its way to our Download Centre.

A Worldwide Launch will follow next week for The Lower Road. Date to be announced.