The Story of the Rose Sessions + Playlist 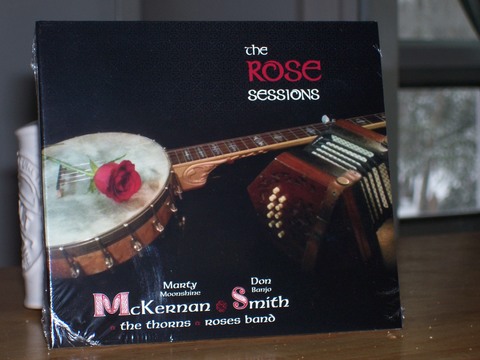 Don Smith and Marty McKernan provide some interesting background to this rather interesting collection of songs on a new album called The Rose Sessions.

Don and Marty are two Tri-State Area musicians who have played the pub circuit for some years. Marty was the founder of “The Moonshine Mountain Boys”, who performed from 1975-1982, and played primarily Bluegrass and Irish Folk music. They met on that folk circuit and have remained friends ever since.

In the nineties they started a recording project with Jeanie Cassels and Peggy Greene.  It was to be a concept album revolving around a rose theme.  “We started recording in a chapel in Vernon NJ during the winter of 1999-2000, with two friends as recording engineers. After a few sessions, unfortunately, the project stalled due to scheduling, personal commitments, etc…, and was put on the back burner for , well, fourteen and a half years!”

The project was resurrected in October 2014 when Don once again raised the subject with Marty.  The green light was given and two weeks later they started recording in Twain Studio in West Milford, NJ.

“Over the next three and a half months, Don and Marty made seventeen trips to Bob Both’s studio, and with the help of Jeanie Cassels, Peggy Greene, James Sattler, and Lynn Panico, they were able to record 14 songs, most Irish, all with some sort of Rose theme, and an obsessive dream became a reality.”

The result is a fine collection of “rose” songs that are given an honest and heartfelt rendition. The album has been receiving high praise and you can check it out at www.cdbaby.com