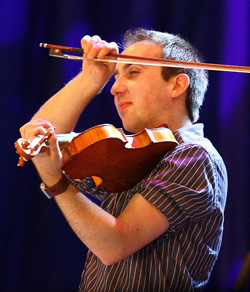 Oisín Mac Diarmada will give a series of master classes at the TIMES Springhill Retreat Center, 3991 Renner Road, Richardson, Texas April 15th - 19th 2013. The classes are designed for students, ages 18 and older, who already play fiddle and consider themselves intermediate or advanced in their level of ability. A graduate in Music Education from Trinity College Dublin/RIAM, Oisín Mac Diarmada began playing fiddle at a young age in Co. Clare, subsequently moving to Co. Sligo and developing a deep interest in the playing style of the North Connacht region.

Founder of the group Téada in 2001 with whom he has recorded a number of albums on the Gael Linn label, Oisín is also a regular solo performer. Performances have included appearing at specialist music festivals such as Masters of Tradition in West Cork, accompanying Irish President Mary McAleese on a State visit to Romania and a guest solo appearance with the Southern Georgia Symphony Orchestra in the US. Following the release of acclaimed solo album, "Ar an bhFidil" (Green Linnet) in 2003, Oisín was subsequently featured in US magazine “Strings” and described by The Irish Echo's Earle Hitchner as "one of the most gifted and creative traditional fiddlers playing today." In recent times, Oisín has also toured with noted singer/accordion-player Séamus Begley, with whom he released a duo album in March 2011. A follow-up duo recording is scheduled for December 2012 release.