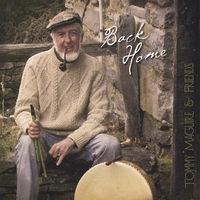 Back Home" is the second album that Tommy Maguire has recorded.  Its a follow on from "Songs of Home" that was recorded in 2001. This is a 2010 recording that has been with us a while and we got to talk to Tommy Maguire recently by email.  This album like a lot of music being produced these days is a personal undertaking by musicians that are very passionate about their music, heritage and culture.  He explained that

"I have always been a singer, of the barroom variety, that is, and I take delight in being called a whiskey tenor, a fictional designation.  After a 35 year stretch as a high school teacher (English and theatre), I decided to learn the bodhrán and penny whistle as adjuncts to roaring out some of my songs at local seisiuns. I had amassed a number of songs learned from my father and from the many people I met in Ireland over the years. September 2012 was trip No.45, so I guess I can call it "home", even though I was born here in Rhode Island.  Also, I have had Irish citizenship for 20+ years. Back in 1999, I was encouraged by a retired Jewish publisher (who loved Irish music) to do a CD which focused almost exclusively on songs. Being of a "certain age" myself, I went ahead with it. I am completely untrained except for taking classes at Gaelic Roots and in the Catskills. I have also gotten loads of help and tunes from the many musicians I play with. We are very lucky here in Rhode Island to have 5 or 6 long-running weekly seisiuns. I am also deeply indebted to Jim Flanagan, Joe McGrath, Noel Carberry and Willie Kelly (from the Roscommon-Longford area) whom I have known since 1988."
Tommy includes some great songs that would not be heard too often like Emigrant Eyes, Second Hand Trousers, The Keeper of the Songs. There are also a number of humorous songs included which are always good for that party piece that you may encounter.  His love for these songs and his desire to record them is not that different to the approach taken by Dick Hogan whom we wrote about recently.
You can have a listen to the album on   http://www.cdbaby.com/cd/TommyMaguireFriends