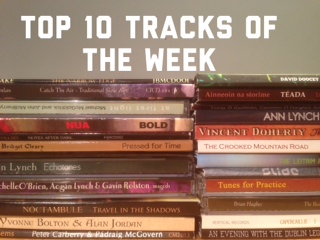 This track is taken from, The Sunny Banks which won our "Traditional album of Year 2013" on Tradconnect

Quite a surprise the album this track was taken from.  It's called The Language Within and features this very talented Derry family and some of their close musical friends. We will be getting to a review shortly.

Their Facebook pages states that "The dynamic Lurgan duo of Fionntán McDonald and Eoin Kearns play an eclectic blend of Irish, American and contemporary instrumental music." They have just made a short 4 Track EP to mark their arrival on the scene and its pretty impressive. Fiddle with guitar, guitar with banjo, a tinge of old time in there.

John Sherman and Randy Clepper are two central Ohio-based multi-instrumentalist musicians who perform as a duo on bouzouki, fingerstyle guitar, and tenor banjo.  The two have previously recorded solo and with other ensembles, but have (finally) released a duo album, "Finally Tuned", with John on guitar and tenor banjo and Randy on bouzouki and guitar.

This newly released track is taken from their album from 2013 with the RTÉ Concert Orchestra.

7. Thierry Masure - Kitty Lie Over / The Frost is all Over / Meelick Team / The Millipond

From the man that has made Clare his adopted home a nice set of tunes.

Caladh Nua are going back into the studio again this year and this is the quality that you can expect.  Taken from their last album called Next Stop.

Kathleen Parks is a wild Irish fiddler from Newburgh, New York. She started playing the violin at the age of five and got heavily involved in Irish music by the age of ten. As she quickly progressed, she became interested in many other styles of music; Jazz, Classical, Fusion, and Bluegrass.