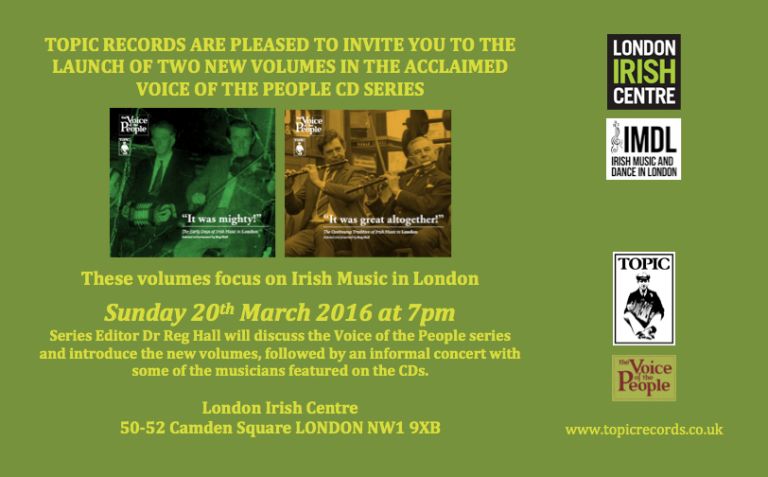 To celebrate the launch of 2 new CD collections & e-book of Irish music in London from Topic Records, ITMA is hosting an afternoon talk by Dr. Reg Hall in 73 Merrion Square. The event takes place on May 14th from 4 - 5pm. Tickets are free and early booking is advisable as places are limited.

Reg Hall’s monumental and comprehensive history of Irish music in London A Few Tunes of Good Music is also available for free viewing and download as a fantastic online flipbook, complete with many illustrations, discography and original interview material. Follow this link for free download.

On March 18th 2016 Topic Records also released two magnificent compendiums of Irish Music in London. Some of the most talented young traditional musicians from rural Ireland found themselves in London in the 1950s, working on the buildings and in heavy construction, away from home, but among hundreds of people like themselves. Music was played in pubs and dance halls and, for a decade or two almost every night of the week, Camden Town, Fulham and neighbouring boroughs were buzzing. Even as far as the outer suburbs, in some back-street pub or other, there was great music to be found, that is, if you knew where to look for it. Beyond the gaze of mainstream society and unknown to the media, promotion was solely by word of mouth among the Irish themselves.

As a lad in Roscommon in the 1930s, Jim Donahue played the flute regularly with an older man, Michael Coleman’s brother Jim. He recalled whenever Jim came to the house: “He’d take down the fiddle. Then you’d hear a few tunes of good music altogether!”

Compiled by Dr. Reg Hall, these two three-CD collections of rare recordings allow us a very privileged view of a unique community who lived this music. Here are some great musicians, some great tunes, and great warmth and humanity. At the time, it was often said, that there was much better Irish music to be heard in London than in Ireland. An overstatement, of course, but there was certainly more of it to be heard in London than anywhere else in the world