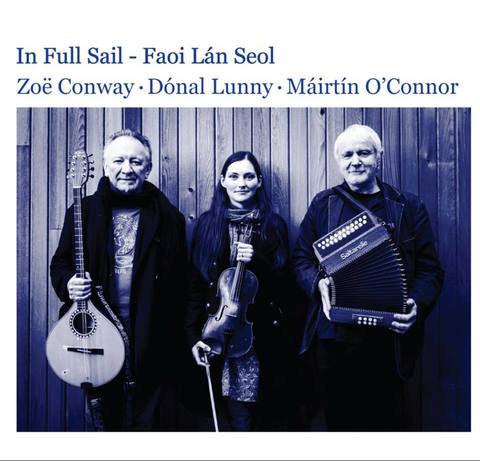 This is our track of the week on Tradconnect over the last 7 days. It isfrom the new album by Zoë Conway,  Máirtín O'Connor and Dónal Lunny called In Full Sail. The tunes are Paddy In London / A Tailor I Am / Adam And Eve.

Máirtín O'Connor was part of the original Riverdance phenomenon. Add to that his work with bands such as De Dannan, Midnight Well and Skylark, his reputation as a composer and solo artist, and recording sessions with Elvis Costello and Mark Knopfler, and it's easy to see why O'Connor is regarded in the folk firmament as something of a national treasure.

Fiddle player Zoë Conway is equally at home playing and singing with Rodrigo y Gabriella, Lisa Hannigan, as a guest soloist with the Irish Chamber Orchestra, performing with Lou Reed and Nick Cave, or touring the world with Riverdance. However, traditional Irish music remains close to her heart, witnessed in her highly-acclaimed solo albums.

Guitar and bouzouki player Dónal Lunny needs no introduction, having made his name as a member of the hugely influential groups Planxty, The Bothy Band, Altan and Moving Hearts. A gifted composer, arranger and producer, Lunny has also worked with rock and pop musicians such as Van Morrison, Elvis Costello and Kate Bush.

This album is an independent release and was recorded at Grouse Lodge Studios.

It is available from www.zodomo.ie and can be downloaded from Bandcamp