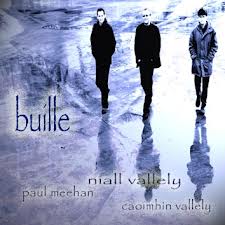 TradConnect member Niall Vallely and friends were so inspired by the success of a series of experimental concerts they did in 2011 that they will under the band name Buille unleash their new musical extravaganza on a 7-date tour across Ireland. ‘Junctions’ was a series of 6 concerts which took place in Cork City and saw Buille host some of the most high profile gifted musicians in international folk music including Béla Fleck, Martin Hayes, Jean Michel Veillon, Karen Matheson, Steve Cooney, Arty McGlynn, Michael McGoldrick, Dónal Lunny, and many others. This new project will feature new music conceived for the original series as well as new arrangements of pieces from sources as diverse as Steve Reich and Joe Zawinul. The odd jig and reel might feature as well for some balance! The touring cast will include Armagh brothers Niall & Caoimhín Vallely on concertina and piano, Ed Boyd on guitar, Karan Casey on vocals, Kenneth Edge on saxophone and the incredible dancing of Nic Gareiss.