Bringing the Céilí back to the people - Traditional Arts Collective I was reflecting recently on the trad scene in Dublin and how rare it is to find traditional dancing in pubs, confined as it is to Comhaltas centres, formal shows or Céilís. I recall returning from London in the early 90's searching the pubs of Dublin for some good traditional music.  In the end we found Hughes' pub beside the Four Courts which was as old style as you could get.  It had and still has a snug at the front as well as the main bar where the musicians played.  It was reminiscent of some of the west of Ireland pubs that I used to frequent.  Not alone did they have great music but on Tuesday nights Céilí dancers from a nearby dance class came in to practice their steps which was a joy to see. I think that this still happens there and no doubt in a few more isolated venues.

One man who hopes to cultivate this further is Tradconnect member Jonny Tennant who recently set up the TAC (Traditional Arts Collective).  When we spoke to him he stated that his goal was to " bring the Céilí to the people" and that the TAC was just the vehicle to help see this through. He explains that last February "with the help of a few excellent musicians, he set up TAC. It was kind of a surprise success and since then we've played at various festivals in Ireland and we've also done some radio, TV and film work. So what’s it all about?.

"The idea behind TAC is that reels and jigs are dance tunes and should therefore be danced to. Our mission at TAC is to 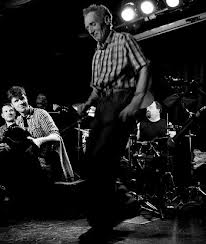 bring the Céilí back to the people! We have regular Céilís in The Grand Social to tie in with the ancient Irish festivals. The next one is a charity Céilí on Valentines night." However they have taken it a step beyond the dancing in order to provide a more rounded night of entertainment.

"Apart from the Céilí dancing" he explains "which is called by great Dublin singer Jerry O'Reilly, we also have sean-nos dancing courtesy of Mary Beth Taylor, Sibeal Davitt, Siobhan Doyle and others. What makes us different from other Céilí bands is that we have a full drum kit and bass guitar present which makes for a rocking sound! In between the sets we have songs from Katerina Garcia and Alison O'Donnell in the form of waltzes and even slow dances!! Does it go down well you might ask? "Usually the whole room ends up dancing at our gigs. It's a great, fun way to meet people and it's also good for you."

The TAC has been featured on NBC Katie Couric, TG4, at Phizzfest, The Spirit of Folk Festival to name just a few. Musicians with the TAC have also appeared with bands like Stocktons Wing, Afro-Celt Sound System, Slide, Ciorras, Dun an Doras and many others. Jonny himself has a few more irons in the fire and has played with Czech/Irish band Dun an Doras back in the day.  He explains that "at the moment, apart from TAC, I also run free folk gigs every Tuesday also in The Grand Social called 'The Grand Folk Club' and this year I also did some music for the new Irish made computer game of the Cuchulainn saga called Ku."

While the Summers are quite hectic, the Winters bring a lull that has allowed the TAC to take on weddings as well. Irish weddings have long since needed a revamp with some new thinking to bring the culture and fun back into the occasion.  This might very well be the ticket that does that.  Check out their website www.traditionalartscollective.com

Note : If you would like a similar article on your organisation, community project, band or traditional project simply email us some original content to tradconnect@gmail.com and we will follow up with call/email and article ( time permitting ).