Keep up to date with the latest album releases throughout 2017 with this guide.  We will feature all the albums that we officially launch on Tradconnect throughout the year. These releases are added to our Digital Download Centre where over 110 Irish Radio Broadcasters across the globe can download them for free. If you want your album to feature in this guide simply contact us at this address

If you have an album on release in 2017, contact us and reach a global audience. 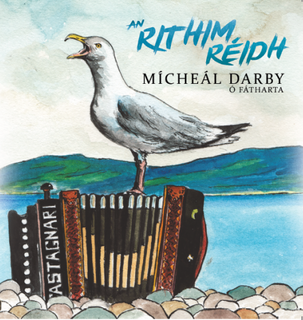 Mícheál Darby Ó Fátharta. After a seventeen year hiatus, Connemara melodeon player, Mícheál Darby Ó Fátharta, is back on the music scene with a new album, An Rithim Réidh. The title, roughly translated as ‘the steady rhythm’ is an apt description of Mícheál’s distinctive melodeon playing: an unassuming, mellow, easy going style that underscores a deep respect and understanding of the instrument. The Living Stream : In late 2015 we covered a new folk band that had just formed in Galway called The Living Stream. What started out as a rather simple project to record some demo tracks in a Galway studio, developed into something much more involved. Brian Kelly was the driving force behind the project and explained that “the plan was to record a handful of tunes with a group of traditional Irish session musicians. Éilís Kennedy. Westward, the new album by Éilís Kennedy is a product of life on the Atlantic fringe, with songs in English and Irish inspired by famous musical nights in Dingle and beyond. Having travelled to the west coast of California to record with Grammy Award winning guitarist William Coulter, this album reflects where Éilís is at now, as an artist. Featuring traditional and contemporary songs and in a new departure for Kennedy, two self-penned originals, referencing her own distinct place and people. Other releases we know about.....

Deirdre Starr - Between the Half Light

Orla Fallon - Sweet By and By

The Henry Girls - Far Beyond the Stars

If you know of a 2017 album that we have not covered leave a comment below.