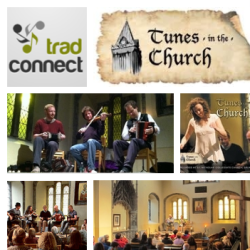 I grew up in Kinvara, Co. Galway, surrounded by traditional music and began learning the fiddle (for my sins!) at the age of 6. My influences are eclectic to say the least, but when it comes to traditional composers, I hold the old East Galway musicians (Paddy Fahey, Eddie Kelly, Tommy Coen etc.) in especially high regard. I currently perform with a number of groups (see rowanpiggott.com for links) and play several weekly trad sessions where I live.

This hornpipe is a relatively recent composition and flits between the dorian and the natural minor modes – a movement I find particularly evocative.

My name is Keelan McGrath from Borrisokane, Co Tipperary.  I have been playing music from the age of 8 and my main instruments are button accordion and melodeon. I am inspired by the music of Paddy O’ Brien and Ned Kelly from Tipperary.  I also love the compositions of the great Finbarr Dwyer. I have been taking part in the Fleadh Ceoil for a few years, its a great social event and I have made many friends and also have been honored to win a few awards at Fleadh Ceoil na Heireann including 1st Place " New Composed Tune" which was an open age competition in 2013. I was also selected as a competitor in the "Sean O Riada Gold Cup"

My name is Jakub and I play the uilleann pipes (when they don't play me instead). I come from Prague, which means that I was, at the beginning, more influenced by recordings rather than live playing (some of my most favourite and inspiring pipers would be Tommy Keane, Tommy Reck, Paddy Moloney, or Ronan Browne). Now I reside in Oxford which finally provides more opportunities for playing with living people.

The tune below is a reel called Yaga the cat - which is our cat back at home whom I like (and miss) a lot.

I am a music teacher from Galway and I teach in Maoin Ceoil na Gaillimhe. I am a traditional musician and I present a traditional music programme on Clare fm. I released a solo concertina CD in 2009 entitled The Daisy Field  and also recorded An Tri is a Rian in 2004.

Because this magnificent Church is from the medieval era, I was inspired to write a planxty type piece that sounds quite modal. I decided to play it on the harpsichord as this is in keeping with the old harp music of that time. I love attending concerts in this Collegiate Church and I hope I have captured a little of its ambiance.

I am Ultan O’Brien from County Clare. This is a jig that I composed as part of a collection of tunes called ‘Home for Christmas’; I completed this collection while I was studying abroad for a three month period in Kecskemét, Hungary. This opportunity and time spent in Hungary arose as a result of the music education degree that I will be finishing next year.

This particular tune of the collection is called ‘The Simple Things’. I enlisted the help of my sister, Sadhbh O’Brien, for the recording of the tune and we took the opportunity to record some other compositions and sets of tunes with the help of Jack Talty. So thanks to Sadhbh and thanks to Jack. Hope you enjoy the tune!