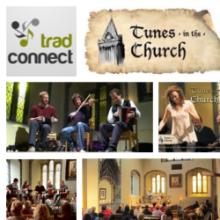 My name is Russ Cole and I play the Irish Wooden Flute and Pennywhistle.  I started playing Fife and Whistle in 1970 at the age of 10 (and I am now in my mid-fifties), when I began an 8 year career with the Colonial Williamsburg Fife and Drum Corps in Virginia, USA.  My love of traditional music started at the same time while under the direction of the Musick Master and Director, John C. Moon, from 1972-1978.  Mr. Moon was the former Drum Major of the Scots Guard and Queens Drummer.  He had run away from his home in Scotland at age 14 to join the Guard.  His knowledge and love of the traditional music has influenced me for a lifetime.  I have the fondest memories of a summer in my teen years when Mr. Moon hosted Cape Breton Fiddler, Ron Ganela, as resident artist.  I have dear memories of many summer evenings, playing garden concerts as part of a group with Mr. Moon and Mr. Ganela.  It was through this experience that I fell in love with the moving rhythm of the slow Strathspey.

By day I hold a professional corporate type occupation.  But in the evenings and weekends, and whenever I can, I renew my spirit by playing traditional music.  After nearly 30 years of denying my musical self, I picked the instruments up again about 6 years ago, and in many ways, found myself and renewed my love of life through the music.  I now hope to record and perform in the immediate future and for as long as I can.

The tune is a Strathspey called "Adelaide."  It is in three, with an odd metre interlude, ending in more of a style of an aire.  It is an original piece I wrote in one day, in 2004, for the memorial service of my mother, Nancy Adelaide Laing Laurier.  She was a second generation Irish American born in the city of Chicago in 1928.  It is my understanding that her grandparents were immigrants from Ireland in the late 1800s.  This tune expresses my interpretation of the joys and trials of her life and celebrates that she and I were able to reclaim our relationship in her final years.

My name is Russ Doherty. This waltz was written for my daughter, Siobhan, who was the original flute player, singer and dancer in our Irish band, Dannsair. It was recorded in my living room using Pro Tools by members of the band: Emily Noble on flute, Karl Burrelsman on fiddle and me on guitar. Emily Noble has her MA in Flute from the University of California, Santa Barbara (UCSB). My BA in Music Composition is also from UCSB. Karl Burrelsman has been playing Irish music for the better part of 30 years. We occasionally play Contra Dances and we always have to end with a waltz. Siobhan’s Waltz is always received very well.

Dannsair has performed every Thursday for the last 17 years at Dargan’s Irish Pub in Santa Barbara, California. We visit Ireland about every 3 years to try and keep up with what’s happening in Irish Traditional Music. We normally perform at Dolan’s Traditional Music Pub in Limerick, John Benny’s & The Small Bridge Pub in Dingle and McGann’s in Doolin. The house bands in those pubs are always very welcoming to visiting musicians.

The tune of Siobhan’s Waltz came to me after we were playing a wedding and the mother of the bride ordered us to play waltzes for the last hour of the reception. I hope the marriage goes better than the reception! It is in the key of Am and I particularly like the B section and the way the melody seems to fade away.

My name is Dmitri Alano, from Indianapolis Indiana. I started playing the highland pipes in 1989. That lead me to the penny whistle which ultimately landed me playing the Irish flute. Today, the Irish flute is my main instrument. I've played in a number of trad Irish bands over the years. Currently I’m the director of the Indianapolis Célií Band and the Irish Arts Academy of Indianapolis. The céilí band had competed for the last three years in the Midwest Fleadh and placed 2nd in 2014 and qualified for the All-Ireland.  The Irish Arts Academy of Indianapolis seeks to grow the next generation of traditional Irish musicians and language speakers.

I wrote my first tune in 2002. It was inspired by a conversation with a group of friends during Celtic Music Week at the Swannanoa Gathering. I didn’t pick up the composing pen until years later when I had the idea to write tunes for members of the céilí band.  I found that I had a knack for it, and very much enjoyed the process.

This tune, The Package Liquor Store (Hilary’s Hornpipe) was written for my good friend and fellow Irish Flute player, Hilary.  She decided to combine her love of all types of alcohol and her need for a stable income by working part time at a local liquor store. She told hilarious (pun intended) stories about the customers (and employees) at the store. Website : www.IndyCeiliBand.com, www.IrishArtsIndy.org www.EnnisClareBand.com

Here's a reel I composed a couple of years ago. I'm calling it "The Seashore"

My name is Jimmy McEvoy. I was born in Dorchester, Massachusetts USA, and currently reside in Naples Florida . I play guitar, bouzouki, whistle, bodhrán, and sing. I grew up singing the folk songs made popular in the 1970's, but now mostly enjoy playing in trad sessions.

I am a founding member of the trad/folk band Wolfhound, based in Southwest Florida. This performance of Frank's Breakfast was recorded as Wolfhound played it as a warm-up to a Wednesday night session at TP Houlihan's Pub in North Ft. Myers Florida. The musicians are: Carey Parks on banjo, Ian Barksdale on fiddle, Trina Schyhol on whistle and Jimmy McEvoy on the bouzouki.

I composed this three-part polka in 2010 after a whirlwind tour of Ireland, where I was fortunate to perform at several venues in County Down, including the Celtic Fusion Festival in Castlewellan. The tune's name is a tribute to the marvelous hospitality received at the Dufferin Inn located in Killyleagh County Down.