U.S. not worth trip anymore: Irvine 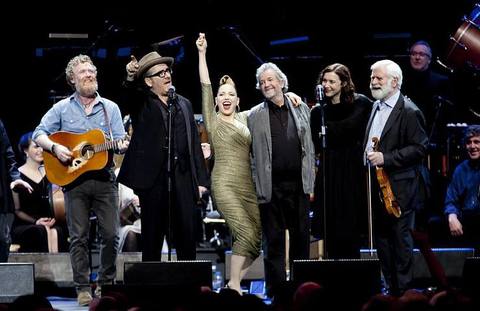 Andy Irvine's nine-day tour of the United States began last Friday and will be taking him through Michigan, Massachusetts, Maine, and New York (see www.andyirvine.com for details).  Regular readers of the column will know that I’m not generally in the habit of announcing tours, but it’s a post Irvine made to his Facebook wall last week, prior to his tour, that has piqued my curiosity.  It read: “Starting tomorrow for my last tour of the US. As ever, looking forward to seeing so many good friends and enjoying their company and the pleasure of playing for good people.

“It’s my last tour because the U.S. powers that be just make it too difficult. From the 30 percent withholding tax, to the tiresome, expensive and ultimately humiliating application for a work visa – which very often doesn’t come through in time.        “Most of all, to the totally unfair disparity between a US musician touring Ireland and all this s*** we have to go through to tour over there, enough is enough.  Age is a factor and so is political uncertainty.”

From Sweeney’s Men and Planxty, to Patrick Street and Mozaik, the 74-year-old Irvine has proven himself one of the colossal figures in Irish music.  He is brilliant and he delights audiences with his performances, but what he’s done here is express the real world frustrations that many Irish traditional artists and presenters know all too well.  It is a shame that he’s been forced into making this decision.

Readers here should realize that the system is incredibly burdensome, logistically and financially.  It has a particularly devastating effect on artists who work outside the commercial mainstream, a group that includes virtually every traditional Irish musician playing today.  Our cumbersome and extremely costly visa system is a constant issue for larger acts, it is a deterrent for lesser-known younger talent trying to establish themselves, and while it is something that affects every music festival and educationally-oriented summer program in the U.S. that presents traditional music, it has actually led to the demise of some of them, including Boston College’s "Gaelic Roots" Festival and Summer School.  To say that it may lead to the demise of others is not hyperbole.

The procedure for acquiring a work visa is in some ways predictable: an artist must file lots of paperwork, including an application and references, and it’s smart to hire a lawyer – a costly proposition – to navigate the process.  Artists are also required to travel to Dublin – sometimes a full day’s trip – for an absurdly short interview.  It’s a fairly high bar that one could argue isn’t insurmountable, except for the fact that the process seems to have little consistency.  Opaque rules applied unevenly lead to the routine rejection of applications.  Backlogs in processing can also render applications, no matter how early made, useless.

Indeed, the only recourse is what is called “accelerated premium processing,” a service that is typically offered, just as things come down to the wire as the threat of cancellation looms.  In essence, this service, which costs well in excess of $1,000, puts an application at the top of the stack, but it also delays the review of waiting applications that have been filed fairly.  It’s unclear whether this approach is the result of poor planning or imposed as a matter of policy, but it seems of be a common element in visa applications for musicians

In addition, the tax situation is cumbersome and unfair, as Irvine rightly suggests.  While there is, indeed, a tax treaty between Ireland and the U.S. to avoid double taxation, in most industries you can apply for a tax waiver for income earned under $20,000.  However, the treaty includes a special provision for the music business.  As a result, an artist’s income is either subject to a 30 percent withholding tax (which is often more than an artist’s actual tax liability and yes, one can apply to recover the difference after filing a U.S. tax return but the process usually takes a full year), or the artist hires an accountant and enters a complicated “central withholding agreement” with the IRS to collect the actual tax owed, which is a costly and time consuming process as well.

The minuscule amount of revenue that most traditional artists would generate here suggests that the current approach to taxation is needlessly complicated and maybe unnecessary.  Surely, there is a better approach, one that eliminates the withholding for those under the income threshold and makes it easier for small-scale artists outside the commercial mainstream to come and perform legally, without the fear of incurring the dreaded (and very real) 10-year ban that is the penalty for skirting the rules?

Lovers of traditional Irish music should be aware that this is the situation artists coming to the United States must face and that the music is worse off for it.  Irvine is but one example, but there are scores more.  The legal hurdles musicians must endure to simply play here are stressful and humiliating, costly for everyone involved, and ultimately make the presentation of Irish traditional musicians coming over from Ireland prohibitive.  It’s an unfortunate reality, and one that few who patronize the music are perhaps aware of.  A streamlined system that simplifies this process for all involved would be most welcome, indeed something we all should hope for in the future.

Comment by Rick Rubin on October 5, 2016 at 18:00
I find myself feeling the need to apologize for the stupidity and short sightedness of the country I call home. As one who regularly visits Ireland and experiences the generosity of Ireland and its people I'm apalled by this article. I had no idea that this is what touring artists went through to play here. I hope changes are made, but I'm not holding my breath. I don't fault Andy or any other artist who chooses to bypass touring here. It's our loss though, and I'm left feeling sad as well as angry!

absolutely spot on. On a tour I was supposed to do in Boston and teh east coast which fizzled out, nobody seemed either able to or want to do all this work so it just stopped at a dead end. And the truth of the matter is that it is really a pittance that would be earned anyway