It seems the women have had it all their own way long enough - promoters and festival organisers are clamping down on all-female bands, and finally setting quotas to ensure that there aren't too many girl groups on stage.

That's the kindest interpretation I can find of the situation highlighted in this Guardian article which still seems to exist today. Trouble is, the quota often seems to be "1 all-female band per festival" - which is a bit on the low side!

For those of us who thought folk had moved on from the Token Women days, it's disappointing that now any all-female band becomes the "token women" for an entire event.

I can understand festivals only booking one all-banjo band, or one all-bagpipe band, and certainly no all-percussion bands - but what's the rationale for discriminating between all-girl bands and all-people bands?

Is it the beards, which are enjoying an improbable run of popularity at the moment? I did suggest on Facebook that Monty Python's Life of Brian provided a handy answer to that objection. Or perhaps it's the belief that folk audiences just don't want to sit and look at women, however good their music is - but I suspect that the internet browsing histories of folkies are no more misogynistic than other audiences, although I personally have never watched corseted lady Morris dancers or leather-clad fiddle divas, if such things even exist. Or is it simply the tick-box mentality? "Tuvan throat-singer - check. Ukulele ensemble - check. Sickeningly talented young Canadians - check. Man with no teeth who used to be able to sing - check. All-female group - oh we seem to have one of those already." If so, perhaps we should add the category "All-male group" to the check list.

Because, to be blunt, there is a massive majority of balding bearded blokes on the folk and traditional scene, some of them boring, many with beer bellies, and that's all fine as long as they are brilliant at what they do, and don't play the bodhran. But to suggest that a few more all-women acts would unbalance the average festival programme is, frankly, bollocks.

I count at least six all-male groups at Cambridge 2015, more than a handful at Celtic Connections 2016, and a skim through the latest folk music mags reveals festivals from Orkney to Mallorca which manage more than one all-male act. I reviewed Birmingham Tradfest last year, and even this quite modest festival presented half a dozen all-male groups - but to be fair there were a few bands with just one token male. The London Lasses and Chris O'Malley. Louise, Michelle and Mick Mulcahy. Catherine, Jacinta and John McEvoy. 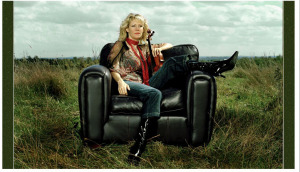 Maybe that's the answer. The Outside Track, Harem Scarem, and of course that famous folk band The Corrs, all include a man alongside several women. This is obviously the easiest way around the all-female stigma! So ladies of Liadan, Rant, The Poozies, String Sisters, Cherish, Girsa, Malarky, The Shee, and even Wookalily - if you find you're turned down by blinkered bookers, I'm available. Give me a call. I even have my own cajon.