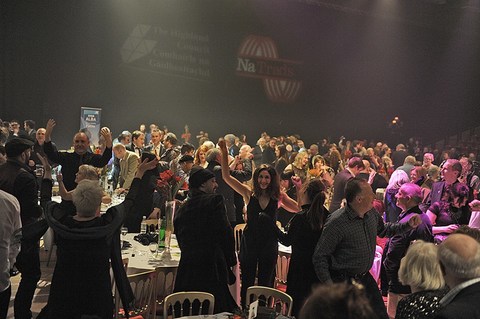 The MG ALBA Scots Trad Music Awards took place on December 5th with live broadcasts on BBC Radio Scotland. The big winners included Treacherous Orchestra, who received the Album of the Year award for their second album ‘Grind’. Ross Ainslie, scooped Composer of the Year and Griogair Labhruidh won Gaelic Singer of the Year. According to Hands up for Trad  “Griogair has made a name for himself in recent years as not only a talented singer but also as a tutor and performer in Gaelic rap, bringing the language to a more mainstream audience through eclectic events across the country.” Live Act of the Year went to Rura, who we have covered on Tradconnect over the years.

Talking about the event, Hands Up for Trad Creative Director, Simon Thoumire, said: “This was our first year in Dundee and it was more than worth the wait. We’ve had a spectacular night with tremendous talent being celebrated, so congratulations once again to tonight’s nominees and worthy winners. Year upon year, we see some of the best talent in the world come to these awards and we are humbled to see our 13th year one of the biggest and best yet, with support from the public and acts continuing to grow.”

Album of the Year - Grind by Treacherous Orchestra

Club of the Year - Orkney Accordion and Fiddle Club

Composer of the Year - Ross Ainslie

Instrumentalist of the Year  - Mairi Campbell

Live Act of the Year - Rura

Up and Coming Artist of the Year - League of Highland Gentlemen

Venue of the Year Award – SEALL at Sabhal Mor Ostaig