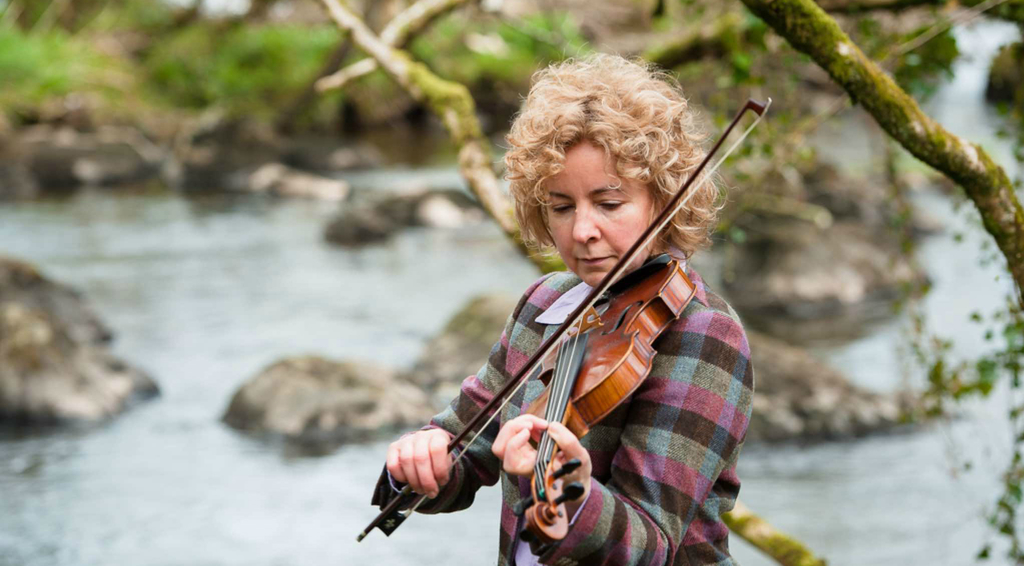 Bríd Harper is an Irish traditional fiddle player from Castlefinn, Co. Donegal who now lives near Dungannon in Co. Tyrone. She is the winner of numerous under-age All-Ireland titles and other prestigious fiddle awards including the Senior All-Ireland, Oireachtas na Gaeilge and Fiddler of Dooney. She has waited until now to release this debut recording and it has been much anticipated.  The reasons for the delay in getting into the studio she says are a combination of being too busy rearing a family of five from 1990 until now, as well as a lack of confidence in herself as a fiddle player. Even today she would not cite confidence as a key trait, but feels that as you get older you tend to be less concerned with what others think.

This debut recording is unquestionably one of the best recordings of the year so far. Across 12 tracks Bríd demonstrates why she is held in such high regard.  For a debut it also combines all the necessary ingredients, in just the right amounts to make it a special recording. She includes moments of solo fiddling that will keep the fiddle enthusiast satisfied and combines this with larger group numbers where her support team excel in providing colour and mood to the compositions that she has chosen. Also as a divergence from the norm she combines various tune types within the sets rather than straightforward sets of jigs, reels etc. As a result you get marvelous pairings of jigs, reels, barndances, slip jigs and waltz’s as she moves effortlessly between tempos within the tracks.

We include below track 11 from the album where she combines Mrs Carroll’s Strathspey with the reels Marquis of Huntly and Beautiful Gortree.  The first tune she sourced from the book “Liz Carroll Collected’. Bríd is a big fan of the Chicago ‘genius’ as she describes her.  Sean Keane is the source of the second tune which was written by Peter Milne of Aberdeen (1824-1908) the last tune is a Tommy People’s composition named after the area where Tommy’s mother was born.

We spoke to Bríd and asked if it was a big decision to go into the studio.  “No I didn’t have to think long and hard about it,” she said.  “Once I made up my mind I was going to record , the next decision was how and where.  Did I want to do it from my kitchen, have it recorded from a live gig or go into a studio? Down through the years I have guested on a few recordings and never really felt comfortable in the studio scenario. I had been playing music in sessions for a good few years with Brona Graham from Portglenone and I knew her brother Seán Óg had a studio in his house.   I went up one day with friends, had a look around and tried out the room where Seán was doing most of the recording. Then there was also a suggestion to do the recording in his living room.  So this idea along with the fact that Seán Óg was a trad musician himself left me feeling more at ease, and I was happy to have him produce alongside myself.”

“I had been playing gigs for good few years prior to recording with fellow Donegal musician Dermot Byrne so he was going to be my first choice for a guest” she said.  “Not alone is Dermot an outstanding musician but he is also a good friend.

Since 2006 I have been playing a regular session in Hayden’s Bar where I was able to expand my repertoire and swap tunes with other musicians.   I especially loved playing with Brona Graham and PJ McDonald two regular attenders at these sessions because of the rhythmic drive in their music. Also in 2006 I was at a John Doyle and Liz Carroll concert in Balor Theatre Ballybofey and I was blown away by John’s style of accompaniment and his energy on stage.   Even though I had no notion back then of recording I remember thinking if ever I was to put something down – I would love to have John Doyle accompany on guitar and fortunately for me, when I asked him, he agreed.

I’ve known Seán Óg’s guitar playing with Beoga over the years and I had been involved in several music projects with John Joe Kelly. When I decided to have bodhrán on some tracks he was an automatic choice.  The only person on the recording that I hadn’t played with previously was Trevor Hutchinson. Seán had suggested Trevor when I mentioned I would like double bass on some tracks.

I started with the first track in June 2013 as PJ McDonald was moving to Australia later that month.  I went back in myself in July and put down 15 tracks one after the other.  Seán sent me a copy and I decided to put some in the skip and I switched some of the tunes about, mixing and matching different sets.  I wanted some unaccompanied fiddling on the CD so next thing was to work out what I wanted guitar on and which tracks with Seán Óg and which with John?

All of the other musicians were so professional and quick at doing their bits and pieces.  My father took ill in December 2013 and died in January 2014 so the project was put on hold for a while.  I went back to the studio later in 2014 to put down one of the tunes that I had written myself.  Seán Óg was always very helpful and accommodating. Fortunately we agreed on a lot of things and I think he got a great sound out of my very ordinary fiddle!"

On the issue of launches Bríd confirmed that she did three launches with the big group of musicians from the CD at the beginning of August in Derry Tyrone and Belfast.

“This worked out well as John Doyle was back in Ireland on holiday from the United States,” she says.  “I did a couple of others solo or with one or two other musicians at various events including Fiddle Week in Glencolmcille, Burren Music Festival Ballyvaughan, Co Clare,  An Creagan Arts Centre in Tyrone and Trad Tráthnóna in Dún Lúiche.  All were very successful and enjoyable occasions. I have another launch in the Balor Theatre Ballybofey Co Donegal on Sept 25th as part of the Blue Stacks Festival.”

“I am involved with the Second Coming Show by the Aerial Dance Group Fidget Feet and playing the music along with John Joe Kelly, John Kelly and Laoise Kelly.   We are touring Germany from Oct 19th-Nov 13th so any tours relating to the CD will have to be after that and here’s hoping that will happen!

The album is now available to purchase from her website www.bridharper.com