Rooska Hill is the new release from Limerick natives Éamonn O’Riordan and Tony O’Connell. Tony hails from Glin in West Limerick but now resides in Co.Kerry. Self-taught on the concertina he has won numerous All-Ireland titles and has been described as having a steady pulsing rhythm - characteristic of the west of Ireland. He released a debut album with Leitrim fiddle player Andy Morrow in 2005 and followed up in 2008 with another duet album, called Rossinver Braes this time with Ben Lennon.

Rooska Hill brings them together on what can only be described as a classic duet album. In less than 30 seconds, you know you are listening to something that is instinctive and natural - qualities that define great recordings. They had a preference during recording to play live, with all musicians in the same room. This, according to Éamonn, is the only way to capture the true heart and energy of  traditional music. “There is a lot to be said for having your fellow musicians in the room with you when you are recording”, he said.  “It creates the necessary interaction that pushes you on and makes you play better, especially when it is with outstanding players like Tony, Arty, Brian and Gearóid”.

Rooska Hill, more than any album, manages to capture that energy and it is evident on the track we share below. It includes Áine’s Reel which they learned from Áine O’Connell some years back, Gan Ainm which is played as a set with The Clare Reel in Sliabh Luachra, and finally, The Clare Reel which was recorded by Connie O’Connell in 2000.

This meeting of great musical minds has been in the making for a considerable time. Éamonn and Tony go back a long way. Their first encounter was when Éamonn was aged 12 and growing up in Limerick. Tony played a regular session in his local village in Glin, Co. Limerick where they played together initially. As Tony had a few years on Éamonn he moved away from home into Limerick City while Eamonn finished his education. Éamonn then moved into Limerick where they met up once again and the music has continued to this day. “We became great friends and started playing together on a regular basis in Limerick City and the surrounding areas” Éamonn says.

“We both come from a very musical part of West Limerick which is home to some gems of musicians that make the area special.  Our music and the way we try to portray it would be heavily influenced by West Limerick musicians like Donal Sullivan, Francis O’Connor and Donie Nolan. It's also fair to say that we both have strong influences from Kerry. We both listened to great Kerry musicians like Nicky and Anne McAuliffe and I often played with Paddy Cronin and Connie O’Connell to name a few.” 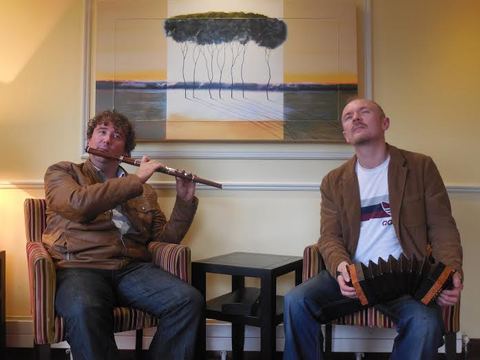 Great recordings have a sound and feel to them that lift them above the ordinary.  Achieving such a sound comes, not from recording techniques, but from following your own intuition about how music should be played. Éamonn explains : “When Tony and I were discussing how to approach the album we both wanted a natural vibe and feel to the music. I've heard many an album over the years with good music played by great musicians. The final recordings however have sometimes been over produced and heavily edited and dubbed, which I think takes away from the brightness and feel for the music.”

That's not what we wanted with this recording. We wanted to stay as true as possible to the great music we learned or heard over the years.”  With regard to accompaniment on the recording Éamonn says : “There were really only 3 people we were interested in, that we felt could accompany our music and compliment it in the way we wanted. They were also great friends of ours and we have played a lot with them over the years. We knew they would have the perfect approach and respect for the music”. Those musicians were Arty McGlynn (Guitar), Gearóid Ó Duinnín (Bouzouki) and Brian Mooney (Guitar) and they were in the words of Éamonn “the perfect combination”.

Add in a recording engineer that basically sat back and let the music flow and you have all the right ingredients.  That engineer was Tony O’Flaherty of Sonas Studios in Kerry and Éamonn says “If we asked for his opinion on any aspects of the sound he would give it to us, plain and simple.   He was a real pleasure to work with and has a lovely studio overlooking lough Guitane outside Killarney.”The album includes 12 tracks nicely balanced between jigs, reels, slides, barndances and flings.

Artwork and painting by Sabine Pichler