The Northern Concertina is the new solo recording by Jason O’Rourke, and it arrives some 15 years after his debut. In the intervening period, he says, “life happened, with all of its chaos, wonder, heartbreak, happiness, and other assorted highs and lows.” He has continued to play, and has been involved in various recording projects over the years; this is his sixth album. Undertaking this new solo project required him to take stock of where he was with his music, and to reflect on his journey and influences over the years. 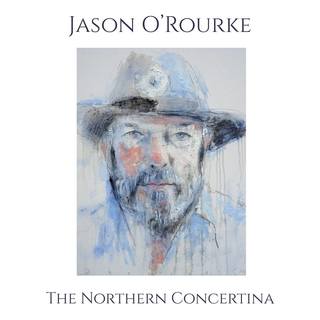 In the liner notes to the album he states that “the concept of the The Northern Concertina was not intended to describe a prevalent style of concertina playing in Belfast or the North of Ireland, where styles and influences differ widely. Rather, it was intended to describe my playing, which I would like to think would be recognisable for its simplicity, power, and rhythm, the legacy of playing for dancing since I was a small boy. For me, the latter two elements, power and rhythm, reflect some of the characteristics of Northern Music.”

His influences are varied. When he decided to teach himself the concertina in England during the late 80s, he said there was hardly anything to listen to in terms of Anglo concertina, so he listened to what he could get his hands on, which was mostly vinyls of Noel Hill, and some Free-Reed compilation albums of Clare musicians like Paddy Murphy.

“I wore out my records of Mairtín O'Connor and De Dannan as well” he said. “Before the concertina I'd been playing melodeon for my mum's clog dancing till I was 14, and drums from 14 to 20, which involved a lot of progressive rock. I suppose what you could get from that early part of my life was rhythm, and that's something that's transferred into my concertina playing. I've played a lot for dancing since I came to Belfast in 1991. When I lived in Oxford in the 80s I was fortunate to be in sessions with some great musicians like Kevin Crawford and (a young) Luke Daniels. But it was in Belfast that it all kind of gelled into the style I have now. There were too many brilliant musicians around to name here, but overall, the sort of driving, rhythmic thing that was going on here really appealed to me.

We include the final track from the album below.  The tunes are called Aggie Whyte’s and Aggie’s Wedding. The first tune he sourced from the seminal album by Fisherstreet called Out in the Night, which had an immense influence on Jason.  The second tune he composed to celebrate the wedding of some close friends.

In total, there are 14 tracks on the album.  All demonstrate the power and rhythm that he referred to above. He introduces Seonaid Murray on saxophone for a beautiful set of Muzurkas called  L’Aguilette/Arthur. Elsewhere Teresa Clarke on fiddle and piano and Stevie Dunne and Tim Edey on guitars provide the support. On accompaniment and in particular the multi-layered nature of the guitar tracks Jason said: “The idea was to get a full sound with plenty of variety, because the melody is mostly concertina by itself. But it was important not to let the backing take over the show. We only used a fraction of the material that Tim sent; we had to be disciplined there, because it was all brilliant and there was lots of it. The inclusion of the sax was about adding another shade of texture on the mazurkas - which are melancholy tunes, and suit the instrument - we kept it low in the mix, so that it was mostly a presence.”

“Other bands have used sax (e.g. At the Racket), although that was different to the way I used it. I got Neil Martin in to play cello on three tracks of my first solo album, The Bunch of Keys. Both recordings might be the first instances of concertina paired with 'non-traditional' instruments, although I wouldn't bet my house on it. I think a healthy tradition is progressive and incorporates experiments and new ideas.”

The album is now available to purchase and Jason is looking forward to a number of launches.  The first will be at the Ennis Tradfest on Saturday 7th November at 3 p.m in Lucas' Bar, Parnell St. There will be a Dublin launch as well before Christmas, but he hasn’t organised it yet. He will also be playing a few festivals next year, and will be collaborating with other musicians on the writing and arranging for the next recording.

The album is available to purchase from Bandcamp by clicking on the logo below. It is also available from www.jasonorourke.info, Custy's Music and all the usual music outlets.

All tracks traditional except:

‘The Frozen Mouse Polka,’ ‘The Mongrel,’ ‘To Hell with Austerity,’ and ‘Aggie’s Wedding,’ composed by Jason O’Rourke, IMRO/MCPS.

‘A Short Walk from Home’ composed by Andy Dickson.

I consider myself incredibly fortunate to have been joined on this recording by some of the most talented and hard-working musicians in the world of Irish Music: Teresa, Stevie, Tim, and Seonaid; special thanks are also due to Neil Shawcross and Jim Maginn for their generosity, time, and friendship. My long-suffering daughter Caoileann deserves eternal admiration for her insightful feedback and for generally putting up with me.

Dónal and Cormac at RedBox Recording; Maria McAlister at the Arts Council NI; Claire Kieran and Pól Deeds at An Droichead; Tom and Enda McGonigle for the lend of the Bb/F Jeffries; Davy Maguire, Andy Dickson and Anne Bailie, Alessandro Capanni and Rosy Brondi, Conor Caldwell, Consuelo Breschi, Christina Herdman, Phil McGurran at The Errigle Inn; Joe, Mark, and Stephen at no. 25 for last-minute CD copying assistance, and finally all my family and friends who have provided me with invaluable support, tunes, and good times over the years.

Recorded and mastered at RedBox Recording, Belfast, June and July 2015.

Tradconnect's Worldwide Launch Articles are commercial pieces that mark the addition of an album to our Download Centre, where broadcasters can access the album and download it for free to play on their various radio stations. Content for these articles is sourced from the artists press release, supplemented with addition content from the artist as required. If you would like find out more about this initiative please contact us.

Downloaded for Jock"s Celtic Calamity on Blues and Roots Radio