Welcome to Tradconnect’s Worldwide Album Launch Series. For these launches we are working with over 65 radio broadcasters globally,making new traditional releases available for immediate free download through our Download Centre. For artists this makes an online launch a truly global event with radio stations around the world gaining immediate access to the album.

The Arrows that Murder Sleep is the new release by Lorcan Mac Mathúna and represents the best of his compositions over a six year period. In this recording Lorcán has worked with a selection of some of Ireland’s most creative musicians in the traditional and contemporary scene. Lorcán is a Seán-Nós singer whose compositions and arrangements go way beyond the boundaries of Sean-Nós. Joining him on this album are Traditional Irish fiddle live-wire Daire Bracken (from the headlining Irish trad group, Slide); Avant-Garde fiddler Eoghan Neff (Riverdance and Anxo Lorenzo), improvising jazz woodwind instrumentalist Seán Mac Erlaine (This is how we Fly); and accordionist and composer Martin Tourish (Altan and TG4 Young musician of the year 2008)

The Arrows that Murder Sleep is a collection of sensual moments of ancient Irish literature, brought fully to life by a group of virtuoso musicians with powerful melodies and dynamic, cinematic, arrangements. It features songs taken from three major commissioned cycles (including the millennial celebration of the Battle of Clontarf, and the Life of Colmcille commissioned by the 2013 All-Ireland Fleadh cheoil, Derry). It includes two songs in English and nine in Irish. And it includes one solo Sean-Nós song (Contae Mhuigheo) and an instrumental response to that; (Paddy Lynch’s ship).

The melodies are driven by the storytelling tradition in traditional songs and the intensely beautiful stories of ancient Ireland, which Yeats describes as; full of “musical occurrences, for they are the literature of a class for whom every incident in the old rut of birth, love, pain, and death has cropped up unchanged for centuries”.

The power and music of stories is at the core of everything on this album. Take two examples: Ordeal by Cohabitation relives the poignancy and tragedy of the story of Liadán and Cuirithir; Ireland’s 8th Century tale of star crossed lovers tragically struck down. The title track traces the intensity of Créid’s grief as she comes upon the still-warm corpse of her lover Dínertach “with seven wounds upon his breast.” The melodies and arrangements take stock of the full complexity of these stories and give them their full breadth and depth.

Included below is track 3 from the album. Called An Cathach, it is the story of a war over a book and perhaps Ireland’s biggest contribution to legal theory; the precedent on copyright.

The story goes that in c. 560 AD Colmcille had a dispute with his colleague, Finden, over the right to copy Finden’s book. Finden, who hadn’t given Colmcille permission to copy the book, took his case before the Ard-Rígh (High-King) who came out with a famous judgement which, not only set an important legal precedent of copyright but also caused a war and for himself to lose his throne.  That judgement, as the Ard-Rí put it was: “To every cow her calf, to every book its copy” 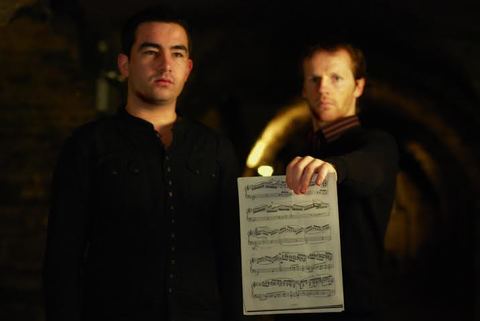 On the overall recording Lorcán says : "Apart from the one solo piece, each of these songs was written as my response to the graphically imaginative style of the text before me. Early Irish literature is marked by brevity and visual immediacy. Take Colmcille’s heartfelt poignancy: “There is a grey eye that will look back upon Erin no more.” The separation it describes is utter and final, and the grey eye offers the reader a window into his turbulent inner being.

“My fellow musicians and I decided that we would record these songs live, because the lyrics are deeply set in the realms of sensation; a feeling that is responsive and “of the moment.” We have always approached these songs with a sort of improvising aesthetic, which suits the narrative immediacy and intensity of the lyrics, so we set up a nice space and recorded everything as a live set. I think that decision really worked for us because traditional music is best expressed in the live drama of musical interactions.”

Lorcan is planning an Irish tour, combining music from this album and from his last release, Preab Meadar, in 2016. Before that Lorcán and Daire Bracken, will be playing in America in March (confirmed dates in Washington DC, New York, Montclair, and Boston) just after Paddy’s day. In the meantime he is working on a show for the Temple Bar Tradfest to commemorate the Easter Rising.  That will take place on January 30th and 31st in St. Michan’s Church in Dublin.

The album is available to purchase from  www.cdbaby.com by clicking on the logo below. Also check Lorcán's website www.lorcanmacmathuna.com

Additional recording on track Cathach and Noli Polka by Daire Bracken; and on A Grey eye by Camille Champernaud

All tracks composed and arranged by the artists as noted

Putting these songs together wouldn’t be possible without the support and generosity of many people. From the people who contributed their skills and talents in making this album to the closer family relations who have given support and time to make it possible. Thanks to my musical companions: Martin, Eoghan, Seán, an Daire for starters. And Liam for taking on the task of capturing the music. Special thanks to friends and family. Especially to my constant companions ar an domhain mór seo: Emma, Aoibha, Meadbh “Tiny the Bearie,” and Fiach MacHugh.

Thanks also to those who commissioned works from me and the musicians on this album over the years. To Martin Harte in the Temple Bar Company; to Eibhlín Ní Dhochartaigh of Culturlann Uí Channáin and the Derry all Ireland Fleadh; to Armagh Pipers Club’s Brian Vallely; and Liam Carson of Imram. To an Comhairle Ealaíonn, CC Átha Cliath, and the NI Arts Council.

Thanks also to Brian Fay and the DIT fine arts students; To Rónán whose beautiful paintings adorn this digibook;  Úna for the technical know how ; Manus Ó Dhomhnaill and Mícheáil Ó Bhruadair for putting it on record at Port na dTrí Namhaid and death row respectively; to Dad and Mam for the love and perseverance and for getting the kids to love sean-nós. An tOll. Damian Mac Manus ó TCD agus Ann Marie Dowling as ucht cabhair len Seana-Ghaeilge. And to an tArd Rígh, Cormac Mac Cearbhaill, for his far seeing Copyright precedent in C.558 AD. We artists really needed that.

This album was produced with the support of An Comhairle Ealaíonn

All tracks Copyright Controlled 2015 © copyright by Lorcán Mac Mathúna and/or as assigned above. All rights reserved, unauthorised copyright, reproduction, hiring, lending, public performance and broadcasting of this recording is prohibited

Tradconnect's Worldwide Launch Articles are commercial pieces that mark the addition of an album to our Download Centre, where broadcasters can access the album and download it for free to play on their various radio stations. Content for these articles is sourced from the artists press releases, supplemented with addition content from the artist as required. If you would like find out more about this initiative please contact us.