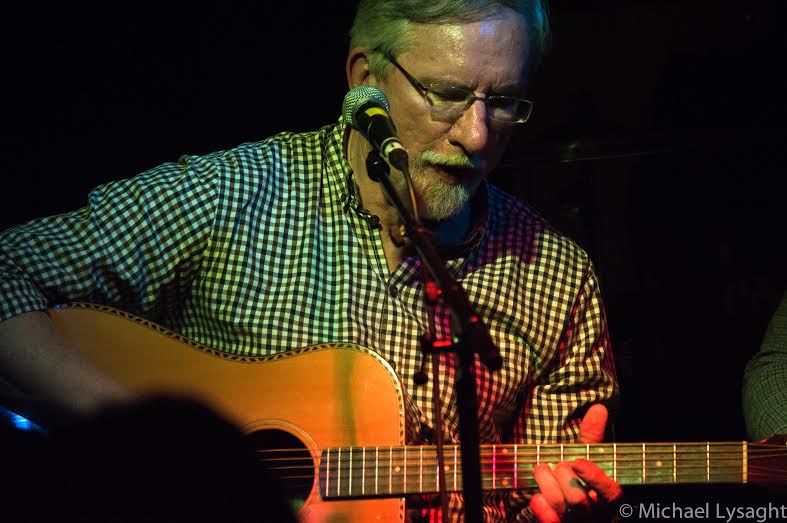 Collaborations is the debut release by Dublin musician and accompanist Mark Lysaght.  For this recording he has brought on board a wide range of musicians that he has worked with over the years, including family and friends. He uses  guitar, bouzouki and keyboards to accompany them on an album that includes 18 tracks.  The musicians include John O’Brien, Joe Toolan, Mark Óg Lysaght, Mary Rowsome, Breanndán Ó’Beaglaíoch, Treasa Lavin, Lisa Conway, John Regan, Liz Coleman, Josephine Marsh, Seamus Ó’Rocháin, Eileen Hassett, Pauline Burke, Paul Kelly, Al Cowan and Clodagh Warnock.

We spoke to Mark about his decision to make an album like this now. He said that as a musician he has always focused on accompaniment, and over many years had developed certain approaches which he assumed were appropriate.  For this project he wanted to explore accompaniment options in a little more detail.  Through these collaborations he got direct feedback from the melody players on what they wanted, or what they thought worked best.

“The original idea was to work with a spectrum of musicians from a variety of backgrounds” he said.  “I wanted to work with different playing styles, and with multiple instances of the major Irish traditional instruments.  I wanted the musicians to pick a favourite set of tunes, and to then decide on an accompaniment that worked for them”.

We include below track 2 from the album.  It features Mark Óg Lysaght on uilleann pipes, Mary Rowsome on concert flute and Mark on guitar, bouzouki, mandolin and keyboards. Mark Óg was aged 14 when this was recorded and has been making steady progress on the pipes since winning the All-Ireland Under 12 Slow Airs title in 2012.  He also performs regularly as a solo uilleann piper with the YOPS Junior Orchestra.  The tunes are The Monaghan Jig and The Pipe on the Hob.

The aim of the recording was to put down on one album a range of accompaniment styles, illustrating the different approaches possible on a number of different instruments such as guitar, bouzouki and keyboards.  Mark goes on to explain that he also wanted ‘arranged’ music which showcased the options available when there is more than one accompanying instrument.  “It made sense to ask people who I felt I would blend well with, and this was a particularly enjoyable part of the process – almost everyone I asked was very happy to take part.  The recording process itself was a fantastic experience with each musician working very interactively with me to get the best result.” We asked Mark what he took from the whole experience and once again he gets drawn back to his youth and his early ideas about music . “When I was younger I was far more bohemian and adventurous in relation to accompaniment” he said. “This was partly because I hadn’t developed a full understanding of traditional music and how it works.  By the time I made “Collaborations” I was far more interested in the idea of ‘arranged’ accompaniment and the possibilities of illustrating different approaches on a single recording.”

“How many informal sessions are ruined because multiple accompanists simply aren’t listening to each other?  I don’t think my approach changed during the recording and this was generally affirmed by the feedback I received.  There were certain areas where conventional wisdom worked very well.  For example the bouzouki really fits very well with uilleann pipes.  Dynamics is also hugely important, the whole idea of having light and shade and variety throughout the piece. In particular, with three different accordion players on the CD, my approach to each is completely different and there isn’t a steel-string acoustic guitar to be heard on any of these tracks.  That was a definite learning point.”

While he was trying to stay within “traditional” parameters, he also wanted to bring in some outside influences here and there, with sporadic use of bass guitar and a hint of jazz and rock from time to time.  “At all times there is a need to respect the tradition, and I think that the musicians involved generally kept me on-side!” he says.”