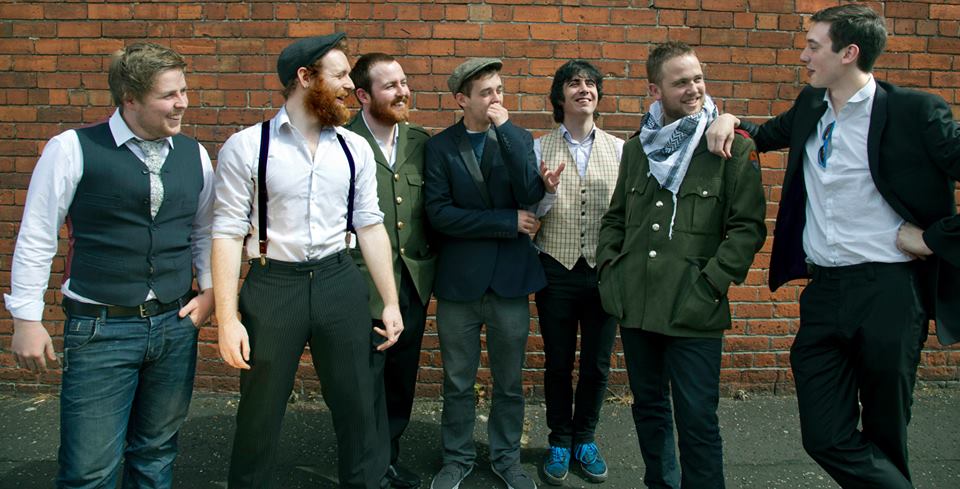 Songs and Stories of the Border is the debut album by Northern group O’Hanlon’s Horsebox. It features all original compositions that have been inspired by their local area and the characters that inhabit it. The band first got together to play at a charity fundraiser in their local pub in Middletown, Co Armagh. “We were all childhood friends who came together for our love of Irish folk music” said Fintan Woods when we spoke to him in advance of this launch.

“None of us had any traditional music lessons, which helped in giving us our edgy sound. We all went to school in Keady, the hometown of folk legend and one of our heroes Tommy Makem. We have played in pubs and clubs around Ireland and further afield, with regular appearances in the student bars in Belfast. We have the best of both worlds where we can play sessions in bars but also play festivals and halls with our Pogues influenced music. We describe our sound as Irish music with a kick up the arse.” Their influences and sound pick up on the raw energy of bands like The Pogues, Ronnie Drew, Dropkick Murphy’s, Christy Moore, The Clash and others.

Our sample track from the album is called 'Farewell to Thee' which was also an entry in our recent Songwriter Showcase with Christy Moore. It is a song about emigration which Fintan says “has been all too real for half of the band. I wrote this song before I had to leave for England in search for work, whilst thinking of the others who had travelled the same path before me and their stories.” They have opted for all original material on the album with a wide range of influences. 'Joe Coburn' tells the story of the boxer Joe Coburn who was born in their local village of Middletown, Co Armagh and emigrated to America before the famine. Coburn went on to become one of the first World Heavyweight Bare-knuckle Boxing Champions after John Heenan refused to fight him and was elected to the International Boxing Hall of Fame in 2013.  'Rachel Corrie' is a song about the murder of the American student activist and 'People from the Border' was inspired by local characters and activities such as smuggling, cock fighting, 'doing the double' and diesel washing that allegedly take place in border areas.

The band are launching Songs and Stories of the Border in Shannon's Bar, Winnipeg Canada, on Saturday 8th August, ahead of their week-long appearance at the Folklorama festival which begins on the 9th August. They will be making appearances on Canadian TV and radio throughout the week.