Cork fiddler Seamus Sands has just released an album of fiddle music called Across Bridges. Its an inspirational album that captures the stark beauty of unaccompanied fiddle, at its best. The album evolved out of a simple desire to record some tunes, for family and friends. The natural environment of the kitchen, where Seamus plays most of his music, provided the acoustic template that Seamus sought to capture on the recording.

The album includes a 12 page booklet that highlights the background to Seamus's music and the tunes.  In it Seamus says: “I play most of my music late at night in the kitchen, with nothing but the accompaniment of fiddle shadows on the wall....it is music to relax and unwind to, music for mind and soul, and music to reflect on.” Those words capture so perfectly the nature of his music, and when we spoke to Seamus, we asked him to expand on this statement.

He said : “Late at night when the house has settled down and all are in bed, I often lift a fiddle off the wall to play a tune to relax.....no particular tune, just whatever comes into my head, and sometimes the one tune becomes quite a few tunes. Sometimes I’ll simply play the same tune over and over, letting it drift along in whatever direction it wants to go.”

“As I look at the fiddle shadows on the kitchen wall at that time of the night, the thought has occurred to me that perhaps I’m not alone, when I’m playing. It isn’t something I think much about, and of course shadows don’t have colour or make sound, but they do have movement. That movement of the shadow’s bow hand or fingers on the fingerboard perhaps gives a hint or suggestion of other influences, and of something almost spiritual.”

When it came to presentation, Seamus was certain that he wanted to create an album of unaccompanied fiddle music. He was also clear that his aim was to record something for family, and that the recording would tell a story.  Several friends suggested he should include other musicians on the album, for commercial reasons, but he stuck with his original idea to simply capture fiddle playing, and nothing more. He envisaged it all taking a day in the studio, but the goal of capturing the sound that he wanted took a little bit longer. 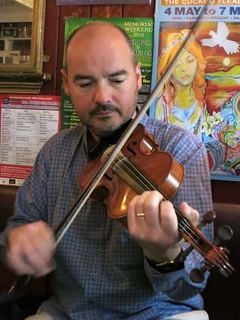 “I naively thought an afternoon in a studio would be enough, but after a few sessions I was still trying to get used to the different sound compared to playing at home, although Donncha Moynihan in his Bishopstown studio was very patient and knowledgeable. I recorded a lot of sets and did end up struggling to decide what not to include, and I cut out some sets that weren’t part of the story, or where the tune combinations just didn’t seem to gel when I listened back. “Across Bridges” has 39 tunes and an hour of music on it ...probably more than enough.”

Listening back didn’t require him to alter his style or technique as can sometimes be the case with debut recordings. “I think those are things that after years of playing become ingrained” he says.  “I did record a few sets in both concert and lower tuning and listening back to those did help me decide what I felt worked best. It’s only a record of playing on that day...it could be different tomorrow.”

This album should have a very broad appeal, especially to anyone learning traditional music.  We asked Seamus what advice he would give to those in search of some inspiration. “For someone learning to play the fiddle it can be very tempting to try to get that new tune up to full speed as quickly as possible” he says. “It is worth taking the time to play a tune many times, at a very relaxed pace, and most importantly, to get a good feel and ability for the rhythm of the tune before worrying about ornamentation or other possible distractions.”

“Think of the ornamentation as something that should fit in with the rhythm without throwing it, or of the ornamentation not just as a lot of extra notes, but as a means of maintaining and accentuating the rhythm. Tuning a fiddle down by one or two tones can sometimes prompt a different tune emphasis or new variations and fits well with slower playing. Maybe the lower tension of the strings has something to do with encouraging a relaxed feeling.”

The album booklet provides additional background information, for those that like more context to the music.  It is now on sale and can be purchased from www.seamussands.com, Custys and other music outlets.

My parents and family circle for providing an environment in which music was always encouraged and supported. Also my many musical friends and influences. I really appreciate what I've learned from them. Thanks also to Dermie Rafferty, Colum Sands, Paddy McCarthy, Noel O'Brien, Anna Bale, Nigel Boullier, Antoin MacGabhann, Marcas O'Murchu, and Pat Mitchell for their help or photos for this project.

And finally, a huge thanks to Susan, and my daughters Clare, Tiarna, and Lainey for all their encouragement, support, and for my continued enjoyment of the music they all play.

All tunes traditional, arranged by Seamus Sands, except for:

The Hairy Chested Frog (Bobby Casey), Her Lovely Hair Flowing Down Her Back

Recorded and Mixed by Donncha Moynihan, The Rise Studio, Cork

Design and Layout by www.ogmediagroup.com

Back cover photograph by Noel O’Brien